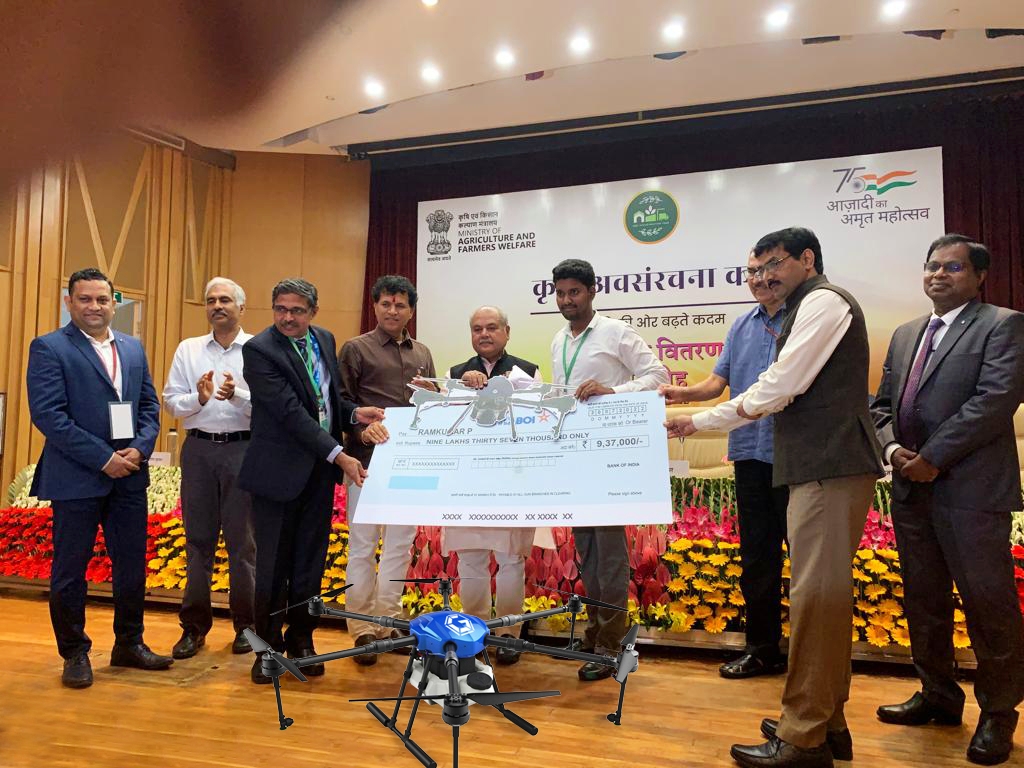 History was created, on 30 July at PUSA, Dev Prakash Shasthri Marg in Delhi as the First ever Drone Loan facilitated by Agri Infra Fund was Sanctioned for a Made in India Kisan Drone, Manufactured by Garuda Aerospace in the Presence of Union Min for Agriculture & Farmer welfare Mr. Narendra Singh Tomar, MoS Ms. Shobha Karandlaje & Mr. Kailash Choudary.

“Ever since Prime Minister Narendra Modi ji flagged off the Garuda Kisan Drone yathra in February 2022, where he flew 100 Drones simultaneously in 100 villages across the country, our goal has been to get loan approval sanctioned approved for our Type Certified Kisan Drones” said Agnishwar Jayaprakash Founder CEO Garuda Aerospace. “Garuda Aerospace has already pre-booked over 2500 drones & firmly on the path to manufacture 1 Lakh Made in India Kisan Drones by 2024”.

Demand for the Garuda Aerospace Kisan Drones has been fueled by the progressive government policies such as 40-100% subsidy schemes on Kisan Drones unveiled during the recent Parliamentary Budget Session, Ban on import of foreign Drones & the 120 Crore Production Linked Incentive Scheme.

Ram Kumar, one of the 25 Drone service providers who has received sanction letters for agri drone loans expressed immense gratitude by saying “This is my dream come true & we will now be able to use the loan to buy Garuda Aerospace Kisan Drones which are the most advanced & affordable in the market”.

He added by saying “Kisan drones cover 25 acres per day for precision spraying operations, save pesticide usage by 70%, save water usage by 80% & I’m generating Rs.1 lakh a month in revenue which is better packages from Byjus, Swiggy, Zomato or Ola”. Former Indian Captain MS Dhoni recently invested in Garuda Aerospace while also endorsing the firm as its brand ambassador.

The Agri Indra Fund functions under the Ministry of Agriculture & Farmer welfare & has spearheaded many Novel funding schemes that are Farmer centric. Joint Secretary Samuel Praveen Kumar who has been well known for his proactive & progressive policy recommendations highlighted that Agri Drone loans could be a massive game changer for the Farming Community.

With agitating farmers nearby, opposition protests in solidarity in Lok Sabha