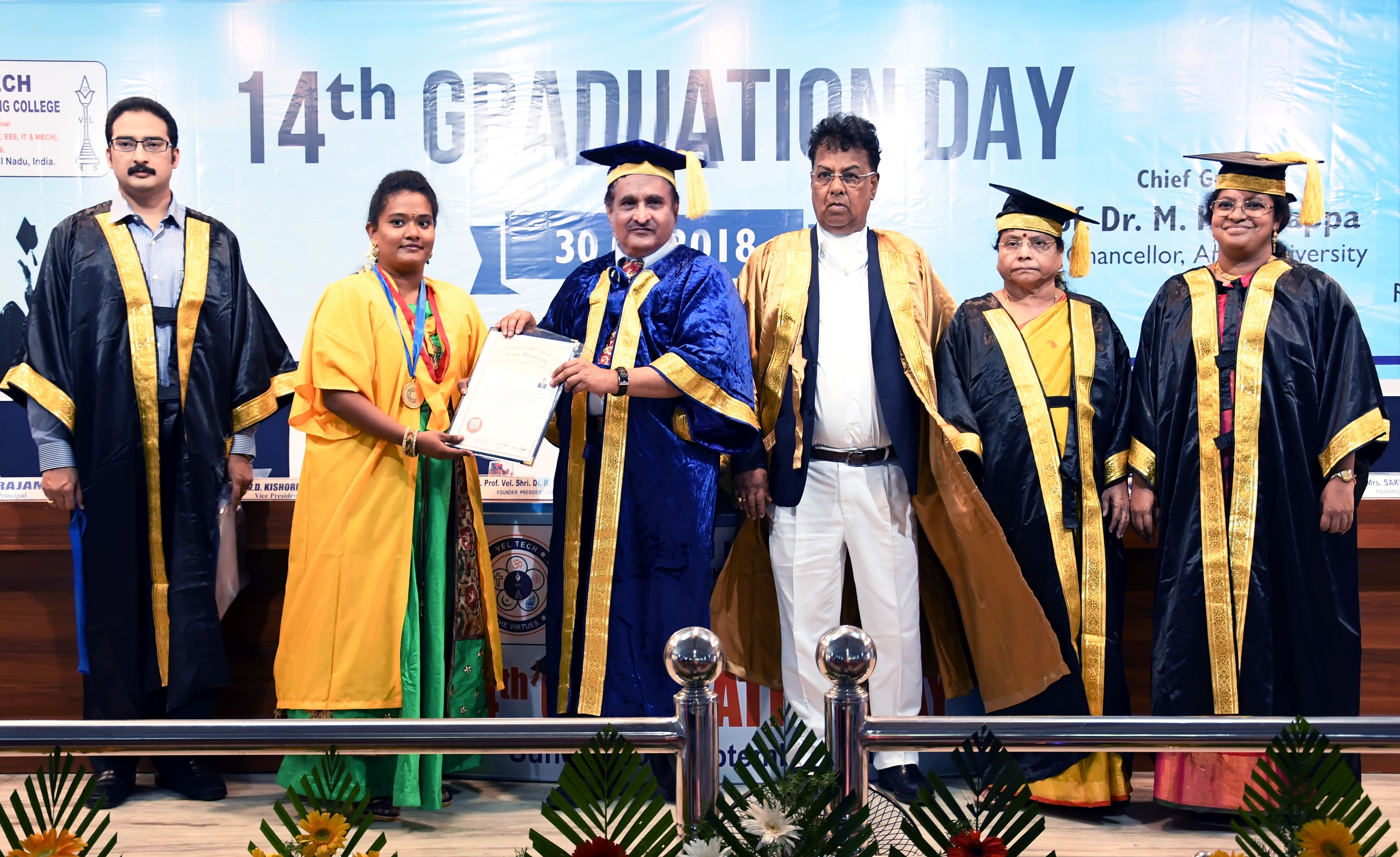 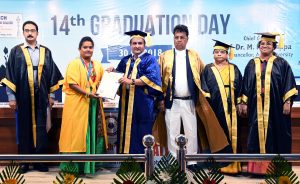 Dr. V. Rajamani, Principal, welcomed the gathering. In his welcome address, he appreciated the hard work and effort put in by the graduates and their parents. He stated that the objective of Vel Tech, the City of Education, is to generate self sufficient employees. It has been accredited by NBA for the Departments of BME, CSE, ECE, EEE, IT and MECH . It Stands amongst the Top 200 institutions ( 150-200 band) in the nation in NIRF India ranking for 2 consecutive years, both in 2017 and 2018. Vel Tech Multi Tech has NAAC Accredited with ‘A’ grade and stood No.1 amongst Anna University affiliated colleges in Tamil Nadu in the year 2016, with an impressive score of 3.49/4.0. The Institution is ranked 19th amongst 497 Colleges of Anna University in the university results released in 2017-18.  It was awarded the 1st prize by the AICTE-CII as the Best Institute-Industry Linked Institute in the nation in the year 2014 and in the year 2015. Therefore winning the title twice in a row for the outstanding performance in catering to the needs of the Industry, linking its academic curriculum and for the best innovative practices in collaboration with the industry.

The Institution has produced 80% results in the Apr-May 2018 examinations, It has 200+ Patents Filed, 1000+ Scopus Publications and more than 1500+ Publications in Peer Review Indexed Journals. It is consistently maintaining  80% placement track record consecutively for the last 3 years with more than 500+ companies visiting the campus for recruitments. Various departments of this institution are engaged in R&D activities which were also funded by various agencies.

In Dr. V. Rajamani address, he highlighted some of the achievements of the institution and all branches of study are permanently affiliated by Anna University and is SIRO recognized, DST – FIST sponsored and also an approved Cambridge ESOL Examination.

Prof Dr.M.K.Surappa began his convocation address by appreciating the management for the institution’s successful growth. He spoke about the present economical growth in India and the need to take up challenges in confronting our global competitors for further enhancement of the nation. He motivated the graduands to be more determined and creative enough to take up challenges with a quote, “To accomplish the impossible, you must first begin with the possible”. He did call attention towards being humane and socially responsible. He congratulated the management for their contribution to the society through quality education. Finally, Prof Dr.M.K.Surappa mentioned this as the golden era of India wherein the young minds should take up opportunities to drive.. MAKE IN INDIA an initiative truly possible.