“In a properly automated and educated world, then, machines may prove to be the true humanizing influence. It may be that machines will do the work that makes life possible and that human beings will do all the other things that make life pleasant and worthwhile.”
― Isaac Asimov, Robot Visions

They say man is to technology what the bee is to the flower. It’s man’s intervention that allows technology to advance and evolve and in return, technology offers man humanitarian relief through greater efficiency and responsiveness via its automated systems. And in this dynamic and transitional generation, robotics is reaching more people, sooner, more cost-effectively.

And witnessing this exponential intervention of technology in our day to day life, the field of robotics and automates is becoming very popular among students. ASIMOV Robotics club, Madhav Institute of Technology and Science (MITS), Gwalior in collaboration with IIT Roorkee organized a two-day intercollege technical fun festival “AAVRITTI 2.0-The Biggest Technical Extravaganza of Madhya Pradesh”. A near about thousand students from schools and colleges participated in this fest, to compete on a big scale and showcase their talent. 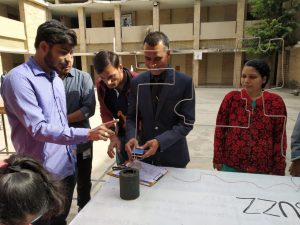 ASIMOV Robotics club of Gwalior MITS, is a group of robotics enthusiasts, with a primary focus on innovation, creativity and learning cutting edge technologies to do projects in robotics and to create an enjoyable student life in this area of studies. With this thought, the robotics fest was organized by the club, providing a forum for similar minds to interact, share and discuss the latest happenings in the field of Electronics and Sciences in India.

The two-day fest was a conglomerate of various competitions, robot battles, engaging workshops, and games. The first day of the fest opened with competitions like Sang Rave, Bot-n-Ball, Aqua Rush and Streak Minion. Along with them, there were many workshops for the students, briefing the students on coding, prototypes, taking their project from scratch to finis. The second day included semifinals and prize distribution.

The workshops included- SolidWorks and Embedded Systems, with summer internship for top seven students. These workshops were informative and specially designed for skill development. 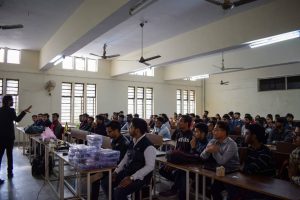 Namratesh, from the organizing team of Aavritti2.0 says, “This is the second edition of Aavritti and the thing in India is – we are very far behind in terms of technological development and research as compared to other countries like China and US. And we wanted to start something that would help students, and even school students who are just in IXth are winners, competing against final year engineering students, so there is talent in Gwalior, but not opportunities. We wanted to give them a stage to show their talent and secondly unemployment because of lack of skills and hence we came up with workshops”

Highlights of the competitions-

Bill Gates said that Robotics and other combinations will make the world pretty fantastic compared with today. And thus, many competitions were held in the fest -for learning and creating, for challenges and thrill and for fun and hard-hitting outcomes. For the competitions, the participating teams had to make their own robot model and compete.

Snag Rave– ten teams participated in this game. The remote-controlled robots of each teams had to clear the pathway filled with hurdles in ten minutes. The winners of this were- Manoj Kushana, Hamet Pall and Sohil from IPS college. 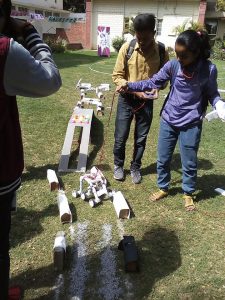 Bot-n–Ball A football for robots with the ground, the size of a carrom board. Time period- 10 mins. The first prize was bagged by the home team MITS -Vedant Sharma, Priyanka Upadhyay, Kapil Sharma, Aishwary Dyvyan.

Aqua Rush– as per the name, the teams had to race their robotic boats in a water tank. Twelve teams participated and the winner was from MITS- Samnver Nighan, Niharika Jain, Boby Sharma, Saumya Shrivastav. 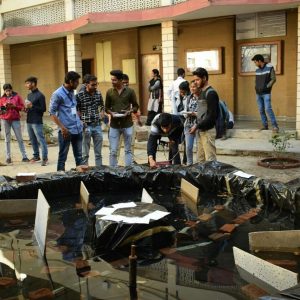 Streak Minion– the robots had to follow a track, the black lined streak. The robot made for this received signals from black and white, and the participants had to control their movement via these signals. Pratyush, Jeetendra, Anushka and Ankita from MITS won the competition. 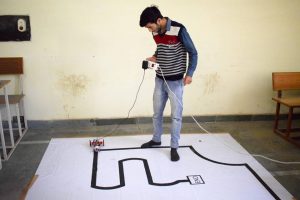 Along with these there were other fun filled games like Nukkad Cricket, Treasure hunt, IPL Auction and Pubg.

Robots have been to mars, to the deepest ocean and now they’ve started to come into your living room, easing their way into your life- that is the ultimate frontier for robotics, merging life with technology. It is a growing field brimmed with potential, and there is a lot of undiscovered talent waiting to be found and fest like these give those kindred minds a stage for their ideas to unfold.