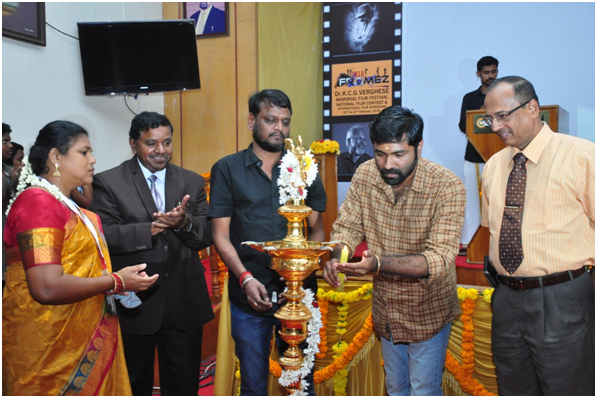 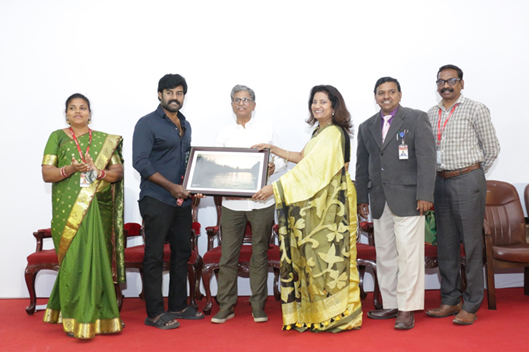 The HCAS department of Media studies inaugurated a two day Dr. KCG memorial film festival in its campus at Paduras. Director of Aruvi Mr. Arun Prabhu Purushothaman declared it open at a ceremony in the MGR Hall in Hindustan campus.

The students and other gathered witnessed promos of past KCG memorial film festivals, guests of honors and staff members. The events were show cased before a lively audience as guests,Mr. ArunPrabhu,Mr. Durai Raj, the Art Director,The principal Dr. S.Thirumagan, the Deputy Director Dr. V.J.Philip and Dr. P Shanthi, Dean, department of media studies HCAS,lighted the Kuthuvillaku to inaugurate this festival.

The four films to be shown included Mr. Ravi’s Aruvi, Tom Hanks’The Forrest Gump, Hiam Abbas’Insyriated and Aamir Khan’s Dangal, the first two were showcased on 22nd Feb and the second two on 23rdfeb 2018. The lively interactive sessions and short film contests were specially planned for this occasion.

While delivering welcome address Dr. P Shanthi said it is her pleasure to welcome all as it is an excellent opportunity to view film and participate in interactive sessionsadding further that it is her privilege to welcome able Deputy Director Dr. VJ Philip,

“It was 1970’s that saw great stalwarts as Mahendran and Ruddraiah in Tamil film now the time has come to see Mr. ArunPrabhu of Aruvi , an exponent in film making has started with him”

Mr. Paulson faculty of Department of media studies gave a short history of Dr. KCG Memorial film festival made in honor of Dr KCG Verghese the founder of Hindustan Group started in 2008, “Framez it is called is becoming bigger and better  year after year, as this year it will be even more big” he said.

Dr. V.J.Philip in his felicitation address considered his privilege to take part and congratulated the department of media studies.

Dr. S. Thirumagan the Principal while thanking everyone, particularly the Chief Guest Mr. ArunPrabhu cordially revealed the reason to bring him saying that the students should attain such a postion as Mr. Arun had.

There is too much crowd to listen to and a wonderful personality state awards national awards 100% will go to ArunPrabhu, talented young director, he said.

He appreciated Mr. Arun for his effort instructed the students present to learn more him. Dr. Thirumagan applauded the movie Aruvi explaining that nowadays there are not many movies coming that have such an orientation impact. He recalled a particular incident when he went to the movies with his father who asked him to close his eyes time and again during the movie as some of the particular scenes were too obscene or vulgar.

P.Vinod a student IIIrd B.Sc Viscom introduced the Art Director Mr. Durai Raj of famous films as RajniMurugan and said Mr. DuraiRaj is a successful art director of many films currently on show and in market.

Mr. Durai Raj speaking on occasion said that he likes HCAS as he shot many times here and regretted not studying there in first place. He further thanked Dr. Thirumagan for inviting him to campus.

Mrs. S. Malarvizhi HOD, Electronic media HCAS was happy to welcome Mr. ArunPrabhu and saying thatbeing a person who gave good cinema in form of Aruvi, a technical Director and story maker he managed to evoke nostalgic moods to all film buffs to study films and art of watching it.

Mr. ArunPrabhu the Chief Guest thanked principal and everyone for invitation congratulated on selecting the films for the festival, also mentioning international quality , good impressions, interactions in making good films and in the end thanked Dr. Thirumagain once again.

The valedictory function of this two day film fest was conducted on 23rd February 2018.  Mr. S.A. Chandrasekar, actor director and film maker and father of super star actor Vijay was chief guest, as Mr. R.K. Suresh another actor accompanied him. Dr. Susan Marthandon Director and Dr. S. Thirumagan Principal and other dignitaries were also present for the ceremony where winners of Short film ad film and documentaries were selected and awarded prizes.

Started with the promos of Framez events staff members, promos on Chandrasekar, RKS Suresh including a prayer song the event was a commendable success.  The HOD of the department of visual communication Mr. MP Prabhu addressed the students of media studies gathered, saying that participation in such events will get them good openings in their coming future. Was thankful to Mr. S.A. Chandrasekar, Mr. R.K. Suresh for coming to the event, thanked Dr. Susan Marthandon without whose unstinting support the event would not have happened. He thanked the Vice Principal Dr. Samuel Sampath Kumar for supporting his spirit and thanked all faculty members present for the event for making it happen.

The department approached and invited over 200 colleges said Mrs. Uma Maheswari Asst. Professor – EM while reading the I st day’s Framez report she added further, that 35 entries came from Loyola college, Asan Memorial College of Arts and Science and several others took part as on 21st Feb 2018 as the Juries took part in seeing movies decided the best from the said submitted Ad films, documentaries and short films, winners were selected depending on the quality of them.

“This event is without a doubt a blooming success. I’m glad for the prominent presence of the renowned SA Chadrasekar” said Dr. Susan Marthandon Director.

Dr.P.Shanthi, Dean, School of Media Studies introduced the chief guest Mr. SA Chandrasekar and outlined his movies as ShobhaIruttarai and others all the while applauding his hard working nature.

Mr. S.A. Chandrasekar conversed in Tamil although he knew English talked about his relation with Dr. Susan Marthandon who in fact, is a very good family friend of his. Divulged a bit more about his future projects that he is currently set upon, talked about his son’s initial failures and his now impeccable success that was all possible because of sheer hard work and effort that he put through. Further he let everybody know that his son Actor Vijay was in fact a viscom student, encouraged the media students to aim high to achieve and not to give up easily upon experiencing failures.

As the event reached its culmination the Prize distribution ceremony was conducted was Gnanaganapathy of MCC bagged the first prize in the short film category, Siva of SRM Ramapuram secured the second position and R Ganesan of Bridge Academy became the third prizewinner.

Mr.Dinakar, jury of documentary film category, then declared the winners of the said category, the first prize went to Manivasagan of Loyola College, and second to AVC college Mayiladudurai.

Then Mr.Santhosh, Jury in best ad film presented the first prize to Ilayaraja Bridge Academy, Second to Manikavasagam of Loyola College and third to Ms. R Sindhu of Bridge Academy.

Ms.Jayalaxmi, faculty, media studies then proposed a vote of thanks to the Director Principal, Chief Guest staff and students present there.