Researchers at Indian Institute of Technology, Hyderabad developed a simple device that can detect biomolecules like bovine serum albumin. Sources say the device will be simple and also be affordable.

Human serum albumin (HSA) has been of great interest and assessment of its level in human blood and urine is important in the diagnosis of a range of conditions such as malnutrition, kidney diseases and liver abnormalities.

However, due to the structural similarities of bovine serum albumin (BSA) with respect to HSA, BSA has been used as a model protein in the research fields.

The development and performance of their sensor for the protein, bovine serum albumin, has been published recently in the reputed peer-reviewed journal Scientific Reports. This work was also filed for a patent. 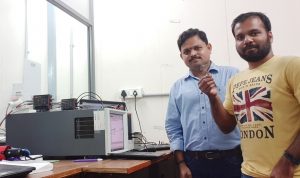 The Memristor essentially consists of two-terminals and the active material that is sensitive to the protein is sandwiched between two metal electrodes that are connected to the terminals.

The IIT-H team used titanium dioxide (TiO2), a white powder that is commonly used in cosmetics and sunscreens as the active material. Silver was used as top electrode and fluorine doped tin oxide (FTO) was used as bottom electrode.  When the active material (TiO2) came into contact with bovine serum albumin, there was a lowering of voltage pertinent to SET switching.

The researchers went a step further to improve the sensitivity of their active material. They coated a layer of graphene oxide (GO) on the titanium dioxide (TiO2). Graphene oxide contains oxygen-containing functional groups on its surface, which enhances the conductivity properties, thereby increasing sensitivity of the device to detect bovine serum albumin.

Bovine Serum albumin levels as low as 4 mg in one mL of the test samples were detected by this hybrid device (TiO2+GO). Suryanarayana further said We have also tested our device for its durability and found that the device performed reliably continuously 650 times. We have provided proof of concept at this stage and extensive work is being carried out to make a portable device to detect Bovine Serum Albumin.’
Share