Fitness becomes the mantra for ICG 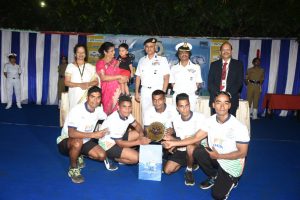 The chief motive behind all the doing was to spread awarness about the need to stay fit and importance of sports among the general public as a part of Fit India Movement of Government of India. The fitness challenge was designed to involve the participants in adventure, sports and fitness activity for the whole day.

Coast Guard Mariners Challenge was one of the activity which exposed the participants to challenges mariners face while on sea. F-45 was also held which tested the muscular strength. Decathlon sports activities like football, cricket, volleyball and basketball were organised and fitness events namely zumba, kalari, silambam, yoga were held.

Veteran sports person Shiny Wilson was the chief guest for the event and day long event ended with prize distribution to the winners. Inspector General S Paramesh,  Commander, Coast Guard Region (East) were among those present.