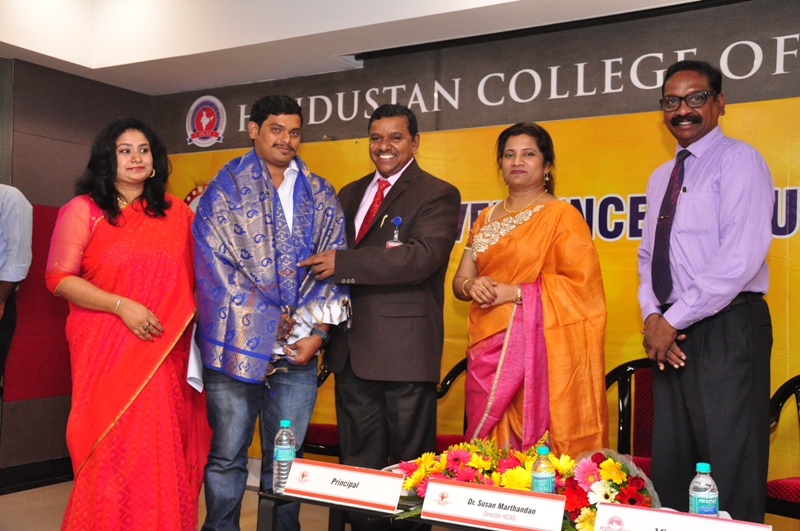 Mrs.Margaret, while welcoming all in her address said that Dr. Susan Marthandan is a powerhouse of this institution, source of inspiration and multi- faceted personality, an Opthalmologist maintaining a clinic. She warmly welcomes her and introduced to the Principal Dr. Thirumagan, former Controller of Examination University of Madras, a dynamic personality and also added that HCAS cherished constant support and has great pleasure in having all on this occasion .

While speaking on occasion, Dr. Susan Marthandan was happy to all alumni as most came first time since passing out of HCAS.The college produced a NIOT scientist as alumni recently. Alumni feel nostalgicalthough the college has grown, changed as most studied here. HIET was founded in 1966 as small institute as Dr.KCG Verghese founded in a small building in Halls Road Kilpaukand as became an Hindustan Engineering Training center in1979 later HIET. From there, he was able to build up, as institution it grown bigger and became great as it is,attended by students from Palestine as well as other countries. Dr Marthandan and Dr. KCG Verghese said along together with Dr. Viswanathan VIT went to M.G. Ramachandran former CM of Tamil Nadu to start self financing college in 1985. It became a reality as HCAS was started in 1995 as it functioned in HIET in years 1995-98. Today, it has 3500 students, growing as it was started with vision of one man of Dr. K.C.G. Verghese- the founder. 50 years spanned, 1966-2016, as 2016-17 was golden jubilee year as teachers are pillars in ways in this college, she said. HCAS is interested in strong alumni association, as all alumni to come and visit this college and to look forward to many years of interaction she added.

The Principal Dr. Thirumagan started his speech praising director, management for adding grace to this auspicious occasion and said he is proud of alumni of Hindustan College. College days brings joy to many as one learns ethical things in college and also knowledge as well. He narrated a story as some educated to change ethics and said you should be wonderful person with more ethics, as knowledge is important also. Experience is important as ethics change a bad person to a good one as students enjoy freedom and spoke of coordination of stomach, brain and heart to function a human body. He spoke of parents affection as one must get it more, give to college society that affection ask alumni to do more to college wishing all success to work to student community. Then Principal invoked Oath of office to Alumni Association office bearers, read out pledge.  The HCAS alumni N.P. Vinoth Kumar, Sundari, M saravanan, Sathish Kumar and others took part on this occasion.

An alumnus Dr. Ganesh Kumar, a scientist of NIOT, spoke in this meet, that it is a happy feeling in being an environmental scientist and recalled co-operation of teachers and fellow students as source of strength. HCAS has improved in activities, labs, national, international achievements, has excellent guidance to students.

Speaking on occasion Sandeep Menon quoted Dr. KCG Verghese who said every man a success, no man is a failure, as he passed in 2004. Freedom of speech, thought to exist and contribute knowledge as Albert Einstein did. It is to bring back work experience to universities, to go back to society wishing success to all, as he finished.

Stevie, another alumnus of HCAS a drop out of HCE spoke also in this alumni meet that  we go to college to prove ourselves as he got motivation from HOD. He took commerce, as it is easier to understand, interesting to study and spoke about his father being proud of him, a millionaire,as he moves around more. He still remembers his aversion to school and the punishment of the environment being in school was a nightmare. Modern online media that he likes as he says that social media helps to develop the skills,he said.

There was a cultural program performed by students, by a girl student starting it as group dance performance and 5 male college students followed.And as it ended, Mrs. Jayanthi Margaret Alumni coordinator asked the gatherings to proceed to Pele ground to take part in event to go on there.

Mr. Saravanan, Alumni Association President of HCAS while delivering his words of thanks said it is a privilege to be speaking on this occasion, a memorable and a joyful one as he gave credit to the Director, the Principal, Deans and HODs. He thanked all others in making this occasion a grand success.