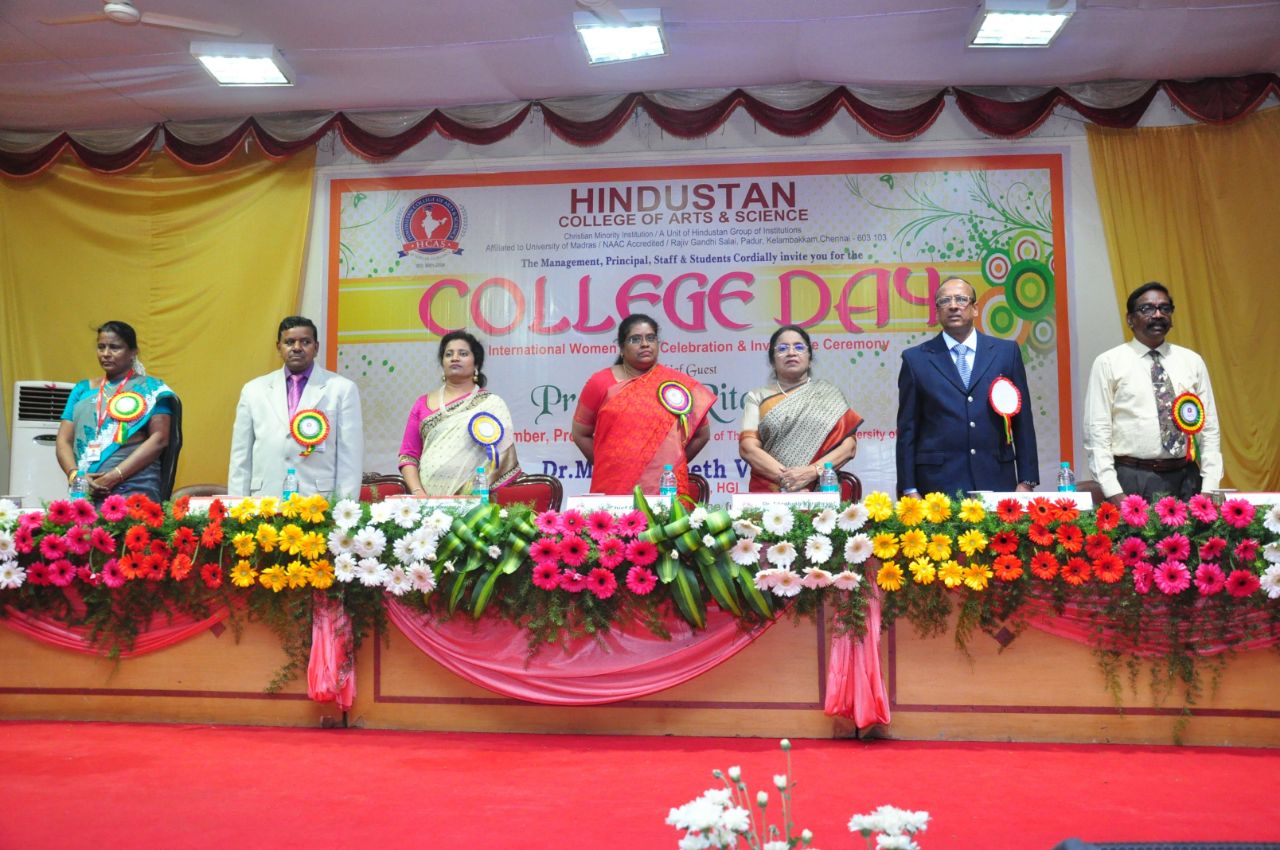 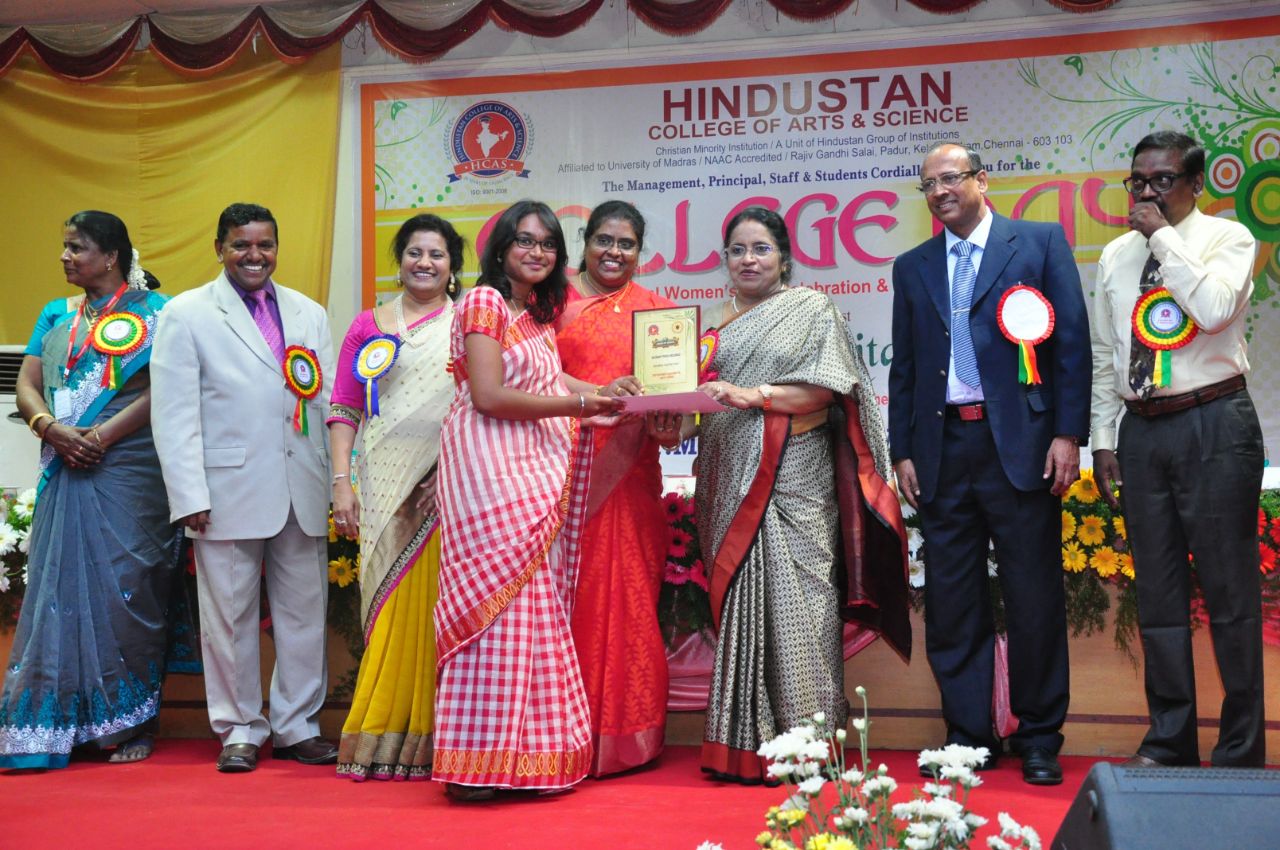 Dr. S. Thirumagan welcomed the chair person and the chief guest all the presenting an annual report on the 23rd annual college day celebrations, the International women’s day and investiture of student council members. He welcomed the Director Susan Marthandon and proudly let the students knew that he had the opportunity to work under her; talked about the consistency of the college that has grown as a result of which courses like B.Com Accounting and Finance and BSW are on cards for next year with the exception of PhD in Microbiology and Bio technology. He also very courteously welcomed the Deputy Director Academics Dr. VJ Philip.

Dr. Thirumagan seemed very happy to present the annual report in his speech, as recently the Department of Humanities tied with Taiwan with at least 18 students participating, the successful way in which the HIV day was conducted. The Department of English had inter-collegiate competition with a Professor of the Presidency College was the chief guest. Soul 2017 was held in August 2017, 35 colleges and 300 students participated. With the exception to that the Hindi literary competition was also organized, many students and staff presented papers. The Hindustan Institute of Technology and Science also organized a competition and HCAS was represented.

The School of Sciences too held many competitions as the Department of Microbiology organized a vermin composting competition as Dean Dr. Ilanjiam received coveted Salim Ali award of private college’s consortium. Dr. Ganesh Kumar and staff presented and published papers.The department of bio technology organized National Conference on August 24 2017, as it approval for starting paramedical courses, and wealth from waste program on dengue awareness was conducted as Dr. Elizabeth, HOD Bio tech department, was appointed in university boards, some students won the competition held in Tagore college and got the chance to appear in Podhigai TV channel. Even the Electronics and Communication department organized a National technical symposium in 2017 for the students and staff. A seminar relating to computational programming was organized on September 20-21 2017, MOU signed with ICT Academy to conduct online courses; guest lectures on Java were organized.

The department of Media Studies too organized photography competition as Framez 18 was held during Feb 22-23 2018, short films were shown, field trips were organized, students made field trip to MGR Film institute. Dr. P. Shanthi, Dean, presented papers and Mr. Ayyappan; was awarded a prize by the government.

E-resource center was started in library open to students and staff, NSS organized blood donation camp. The placement cell, training unit organized placement program as school students were given the opportunity to visit other campus’ as part of open house day.

Dr. Elizabeth Verghese, Chairperson HGI, in her presidential report thanked everyone for inviting her and expressed her thoughts to attend the 23rd Annual day International women’s day celebration and investiture ceremony of the student council.

“Women are components of the society; it is a great occasion indeed to coincide with the College day celebration as HCAS is completing 23 years”

She praised the Principal Dr. S. Thirumagan, Dr. Susan Marthandan for taking time from her busy schedule to attend the event.

“Getting degree is not all that matters; it is a very small step because education continues forever”

–as she quotes the father of nation Mahatma Gandhi.

She wished success to all students and congratulated the student council members.

“I wish you all excel in your respective fields and become great leaders that will lead our country to its glory and help it to progress socially…..”

Dr. Susan marthandon the director expressed her pleasure and honor to be able to attend the event. She credited success to the founder, late Dr. KCG verghese, as the College now has 3500 students and is one of the top 3 private colleges in Tamil Nadu. She spoke on the past student council’s contribution and asked them to transfer discipline and education to the present ones all the while commended them for Hindotsav’18 success. She spoke also on team building, the women’s day celebrations and asked each of them to realize the worth of women today and respect them.

Mrs. S. Malarvizhi, Dean, HOD Electronic Media, introduced the chief guest by letting the students and the staff gathered there to know that Dr. Rita John is a recipient of Fulbright fellowship of the US and was most popular teacher of 2011. She has visited USA, Singapore, China and was responsible for co-ordinated an Indo -Japan event in 2012, she guided many M.Phil. And PhD students as she was the winner of the Women Scientist Award of 2018 from an American organization that published papers and books.

In her chief Guest addressal Dr. Rita John said she was felt honored to be able to attend the HCAS’s annual day, International women’s day. She was reminiscent of her college days as a Lecturer of Physics and described it as it being the best time she had in her whole teaching career.

She quoted English poet Keats , also spoke of Rumanian and of Einstein advising the students to decide on what they want to dedicate their life to be, as their time as students is very precious to waste.

She then spoke of the rise of Women Empowerment and its approach in India, talked about the contribution of women in the field of science as to why there weren’t many women at top positions despite of them being so talented.

The event slowly reached its conclusion as awards and certificates were presented for academic proficiency for year 2017-18 of college the new Student Council Members took pledge.

The Vice Principal of College Mr. Samuel Sampath Kumar proposed a vote of thanks, thanking profusely the Chief Guest Dr. Rita John, the Chair person Dr. Elizabeth Verghese, the Director Susan Marthandon, Deputy Director academics Mr. VJ Phillip, and the Principal Dr. S. Thirumagan for their co-operation along with it he was also thankful to the teaching and the non-teaching staff and students for their efforts in making the event a grand success.