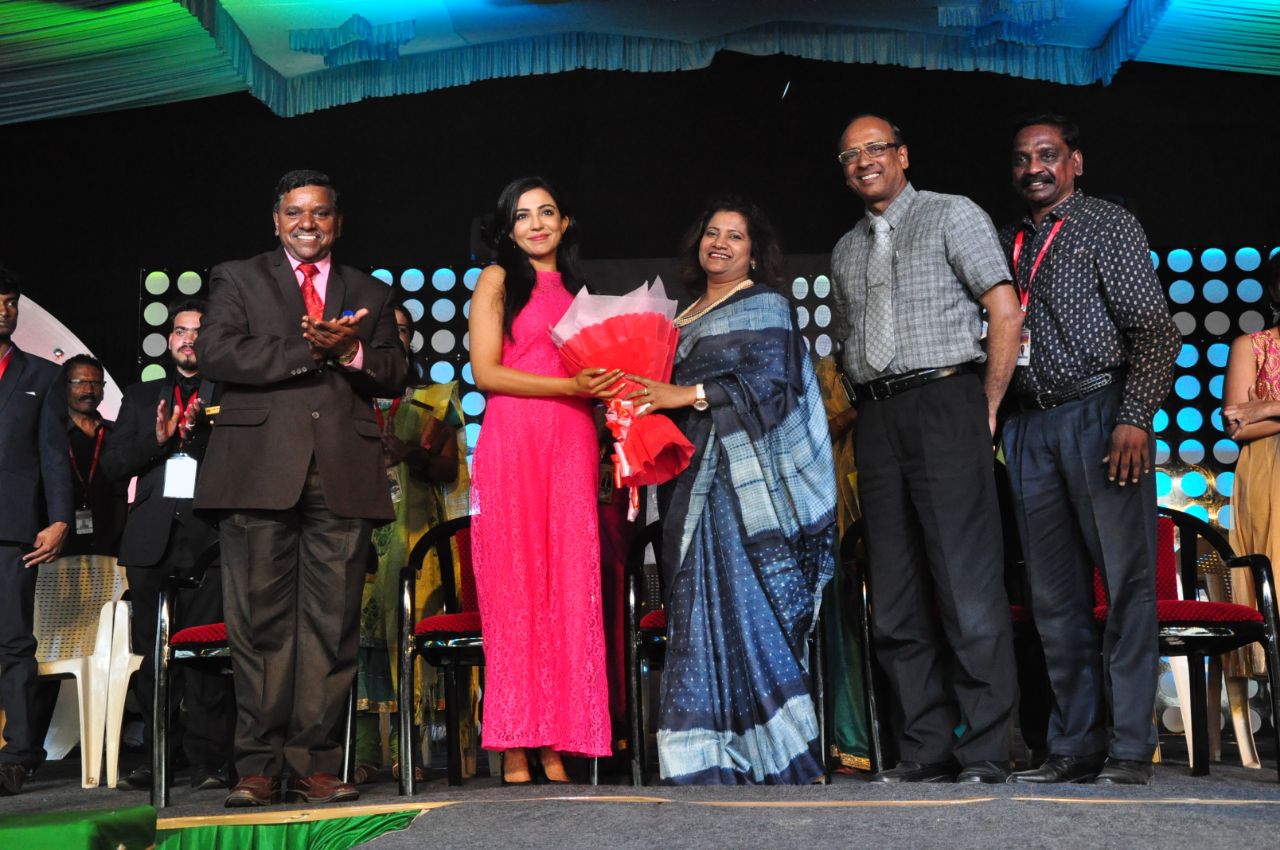 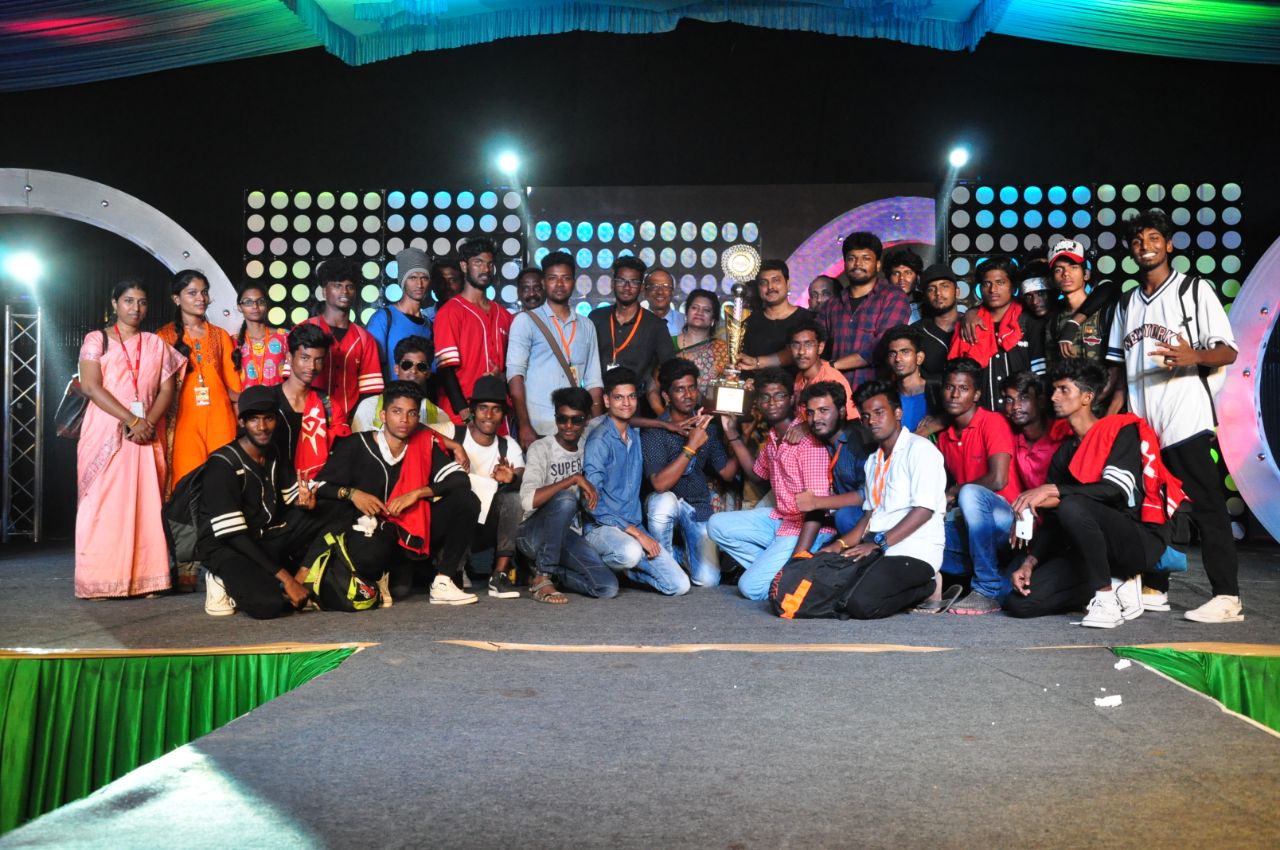 The Hindustan college of Arts and Sciences  launched its Hindotsav’18 an intercollegiate cultural festival on 6th and 7th Feb 2018, in its campus at Padur . It started with a prayer song , Now few glimpses of Hindotsav 18 . This college has been conducting Hindotsav for 8 years now, sponsored by Paati masala, Smart vision and Diabetics clinic, hospitality sponsor being Days Hotel OMR.   The chief guest for inaugural function was actor Parvathy Nair, as the staff of the college welcomed MS parvathy Nair  Director Susan Marthandon College Principal Dr. S. Thirumagan deputy Director Dr.V.J.Philip  and vice principal Mr. Samuel Sampath Kumar. The welcome address was delivered by the Director Dr. Susan Marthandon
Speaking on the occasion Dr. Susan Marthandon welcomed staffs and students of the college and other colleges, welcomed the Chief guest Parvathy Nair and asked the gathering to be merry, she also said, “we all gathered here  to have fun.” and also shared some amazing memories of such occasions. She stressed on the importance of the extra curricular activities and asked all the students to forget about all worries.  While  encouraging them she also cautioned them not to damage any property of the college, welcomed  students council and dean of students Mrs.S. malarvizhi,  receiving a big  round of applause from the crowd.
A bouquet was presented to actor Parvathy Nair, she welcomed all the  chief guests and thanked the management department of the college . As she spoke in Tamil she stated that ,” this is your opportunity to prove your talents and success will come if you work hard and be dedicated and focused.  This is the best time of your life and you should enjoy along with study hard .” and wished everyone a successful time ahead.
Dr. S.Thirumagan the Principal speaking on the occasion said that it is a happy occasion quoting a Tamil proverb in his address  to recollect significance of culturals.  He asked students to stay and enjoy and declared Hindotsav’18 open.
Hindotsav’18 received 70 colleges participants and 999 people were registered for gathering as events include ,Group Dance Shake The Floor,Adapt Tune –Solo On Your Foot, Solo Singing Sing In The Rain,.Light Music Start Music Ad-Zap Ad-Diction, Ramp Walk Steal The Show, Body Building Arms- Strong, DJ Hunt, Mixthetics Freestyle Battle, beat The Beat,Variety (Group) Mocktail andin informal  stage had RJ Hunt Mic Testing 123, VJ Hunt Flaunt Yourself, Channel Surfing Switch Over, Just-A-Minute, Mick Tock and off stage events include Poster Designing Sketch, Face Painting Make Over, Nail Art Spray,Painting Bridal Make-up Glam Up Rangoli Fun With Colours, Treasure Hunt Where Is The Party? Junk Art Grab The Crap Vegetable And Fruit Carving Cut And Carve, online events were Meme Creation Get Spoofy line Short Film, Rolling Sir Photography, The Moment, fun corner had Juke Box Party Poppers Dubsmash Copycat, Selfie Spot Click Pic, Snake &Ladder,  Ups & Downs, Red Carpet Paparazzi  were some ofevents
The events were on 3 places on main stage, at KCG knowledge center and seminar hall among few places  for two days over 2000 students in all had participated. On the first day Vijay TV anchor Andrews was the anchor for the show.on the second day sun Music or Farina did conduct the event.
In a performance as Group dance colleges like Anna University, WCC stella maris Asan Memorial Agarsen college SRM vadapalni participated among others.  The judge Mr. Sheriff shaked some legs and shared some dance moves along  with the students as all the events had invited participation from film industry and other industries of Chennai.
Mr. Sheriff a dancer himself in Tamil TV and film world said it was a happy time spent. congratulated Hindustan college for such an wonderful function.  The group dance had more than 16 colleges participating and choreography would have been planned for 2-3 months before. It is a tough competition and all had performed well.
In group dance first prize went to Anna university, as Guru nanak College collected  IInd prize along with WCC and one more team from  WCC collected special prize. The champion trophy went to gurunanak College as actor Narain gave it in valedictory function
Mr.Narain , a film and TV personality spoke saying the audio visual on him was as good as he was in a film institute .  He missed college life, asked students to enjoy as it is the time for it, as Hindotav’ 18 is  a great show and one should use occasion as this  for entering Kollywood or others.  First you have to get college first district first and then state first. He congratulated  every  partcipants of this event
Dr. S. Thirumagan Principal thanked all in his address for making it a grand success. As the events ended  around 6.30 PM on first day and about the same time on second day. And it was a wrap of this occasion .see you soon Hindustov next year with more jubilant faces and anticipation.