S Vishnu Sharmaa, INN/Chennai, @infodeaofficial
Chennai has another reason to celebrate this time. One of the premier establishment based in this large urban unit of South India won the prestigious second Marshal of the Indian Air Force Arjan Singh memorial international hockey tournament. 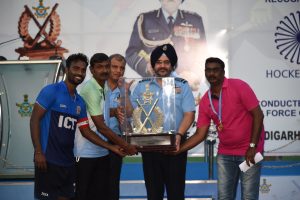 The tournament was held at astroturf hockey ground at 3 Base Repair Depot, Air Force, Chandigarh from 15 to 25 April. The inaugural of the prestigious sports event was held on 16 April where Air Marshal RKS Shera, Air Officer Commanding-in-Chief, Maintenance Command was the chief guest.
The final match was played between South Central Railway and Integral Coach Factory (ICF) of Chennai. South Central Railway (SCR) based in Hyderabad was leading with 2-1, which was when ICF came back into the match-leveling the score with a scintillating goal scored by Deepak in the 60th minute. 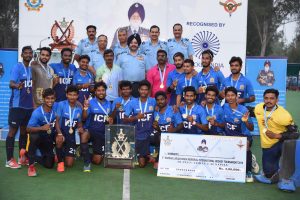 ICF won the match defeating SCR in the penalty shootout round by 7-6. Mohit and Sanjay scored two goals each while Shyam Kumar and Deepak scored one goal each for ICF.
For SCR, Sheshe Gowda, Raju Pal, and Ayush Dwivedi scored three, two and one goal respectively. Deepak of ICF was adjudged the best player of the tournament. A total of 31 matches were played in the tournament wherein 202 goals have been scored.
Winners received the trophy from Chief of Air Staff Air Chief Marshal B S Dhanoa. He also felicitated the runners-up team and the members of the organizing committee.
Colonel G S Gill, former Indian international hockey player, Harpal Singh, international hockey player, former Group Captain RK Raksha, former Services hockey player and Secretary of Services Sports Control Board and Colonel Balbir Singh (retired)  who represented India in the 1966 Asian Games and 1968 Olympics were also felicitated.
Share