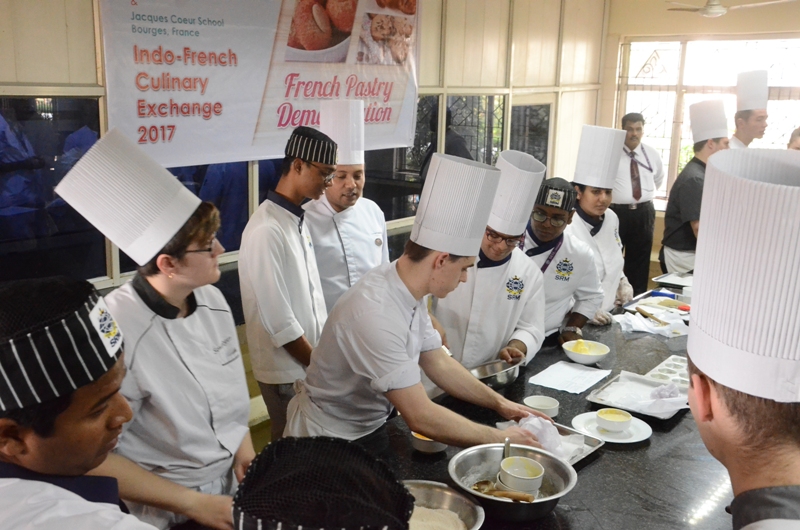 The day began with a warm welcome to the Students and Faculties of JACQUES COEUR SCHOOL, BOURGES, FRANCE  and followed with three demonstrations namely, Indian Culinary Demonstration, French Pastry Demonstration and Flambe Demonstration through which the culinary concepts of India and France was exchanged.

Through the Indian Culinary Demonstration the students of SRM Institute of Hotel Management demonstrated the Indian food like short eat varieties like Punjabi famous samosas, fish varieties like the temptating Karnataka famous semolina fried fish, Lucknowi delicacy dessert Shahi Tukda and few south Indian payasams like vermicelli payasam. In the same way as a part of French Pastry presentation Palets aux raisins, biscuit aux amandes, flamed Banana, Flamed crepes was prepared and presented by Chef. Charles Gilles, the faculty of JACQUES COEUR SCHOOL, BOURGES, FRANCE. Through these demonstrations the students were benefited with the ideologies of both the cuisine.

The radiance of the Food and Beverage Department was illuminated with the Mocktail demonstration by Mr. Bodeaux Claire, the faculty of JACQUES COEUR SCHOOL, BOURGES, FRANCE to the students of SRM Institute of Hotel Management.

Lunch was organized fusing the Indian and the French Cuisine which allured, tempted and satisfied the guests to the utmost extent. Following the lunch the students of SRM Institute of Hotel Management gave enchanting and entertaining cultural performances related to India and there was also unplugged session of music giving them a thrill of Indian Music.

The day concluded with very warm felicitation done by the Director of SRM Institute of Hotel Management Dr. D. Antony Ashok Kumar to Ms. Thamanah David, the Training Manager of The Leela Palce, Chennai, and also to Charles Gilles and Bodeaux Claire and also to the students of JACQUES COEUR SCHOOL, BOURGES, FRANCE.