Music and humour came together to evoke laughter on SRM Institute of Science and Technology (SRMIST) premises recently.

The atmosphere wore a pleasant tone and took a different fervour from its usual one, thanks to standup comedian Kenny Sebastian. Students had an oppurtunity to divert from their usual lesson learning and referring subject books and indulge in wholehearted laughter.

Laughter has its own fan following and that was proved as over 5000 students came together to laugh and giggle to the comic tone. ‘Guys and gals don’t stress because you will be great,’ said Kenny even as laughter was bursting out.

The best way to go is by listening to your self, said the comedian giving out his message to the students. ‘Find your own internal rhythm and look for answers within themselves.’ 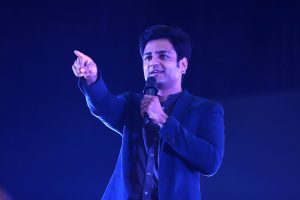 But the problem is most of us never look inside for solutions and seek them elsewhere, he said. Laughter his talk on every topic associated with the student life evoke only has one underlying message, ‘you may be a student of arts, science, engineering, but don’t get stressed.’

Life has positives and negatives to it, but we should not be fettered and instead be honest and work hard without losing our sense of humour, he said emphasizing the importance of mental health.

On the lighter vein, when a girl student shouted ‘I love you Kenny’ he gave an instant reply ‘I don’t know you, you might be crazy, but I am just joking, I love you too, so sweet of you.’

The Kenny Sebastian show was the highlight of the day-long ‘Jhalak’ cultural event at SRM campus. It was a sort of homecoming for Kenny who had a few years back enlivened the week-long ‘Milan’ cultural fest at SRM.

Kenny’s show also brought the smiles to the faces of faculty, educationists and administrators at SRM who have been taking various measures to address the problem of depression among students which has become a world-wide challenge on campuses.