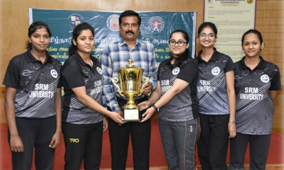 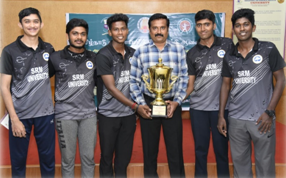 The institution has stood victorious at the Tamil Nadu State Level Inter University Table Tennis CMs Trophy Tournament, 2017-18, organized by Dr. MGR Educational and Research Institute, Chennai, bagging the spot on top of the podium in both the male as well as female categories.

In the Men’s league, the team from SRM lost the first match to Anna University 1-3, bounced back in the second match against BSA Crescent University defeating the latter by 3-0 and retaining the winner spot even in the third and the last match against Madras University by 3-0.

The Women’s league also saw the SRM girls setting fire to the game, winning all the three matches they played against Anna University, SRMC and Madras University by 3-0, 3-0 and 3-1 respectively.