S Vishnu Sharmaa, INN/Chennai, @infodeaofficial
Output will only be fantabulous if you allow children to unleash their innovative ability. This turned true at Municipality Middle School at Govarthanaigiri at Avadi in Chennai recently. Infodea was at the school to know more in this regard. The workshop organised by Casagrand Builder Pvt Ltd saw a participation of 110 students, it gave them a chance to unwind their creative potential. 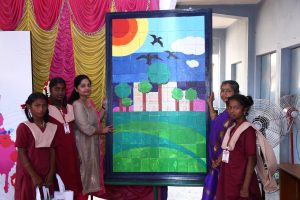 Event was held in association with NGOs Mafoi Foundation and Art Anantya. S Sindhu, senior manager (human resources), Casagrand Builder Pvt Ltd inaugurated the workshop. Soon after the students got art material comprising a canvas of 6/4 inches, set of colours and a cup of water, they dutifully turned their attention to art instructor Durga from Art Anantya. As she spoke on importance of greenery, environment conservation, children obediently listened. 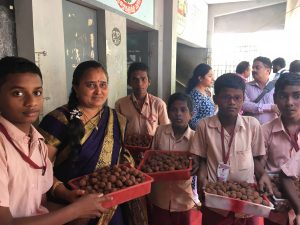 The theme was buildings surrounded by greenery in abundance in form of parks, trees and waterbodies which is amicable for other living forms like birds. As Durga and her team mates Surya and Namrata told, children began paintined a part of the theme on their canvas.
The excitement knew no bounds when these 110 artworks joined together and formed a large collage of size 6/4ft to represent the green concept. Taking part in the art camp was first experience for M Gowthami and R Vinay Joushva, students of the school. But it left an unforgettable impression on their minds.
Speaking to Infodea, they revealed that green theme has motivated Joushva to such an extent that he aspires to make a movie on a subject surrounding greenery soon after he turns into a film director. His ambition is to become a movie director. Gowthami also is not an exception. She wants to focus on healing ailments with help of medicines made of natural elements. Her aim in life is to become a doctor. 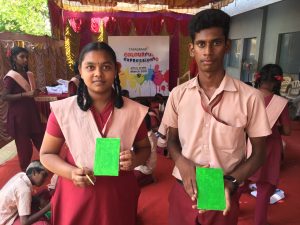 Workshops like these should be held more in government educational institutions said S Umavathi, headmistress of the school. There is no dearth of talent here, such oppurtunities will be boost the inner abilities of students studying in government schools.
As the innovative work of these students turn into a beautiful artwork, their minds will be filled with pride, she said. The headmistress has another reason to be proud. Excelling in art and creative work is not new for students of our school. One of our students Mohanraj (7th standard) won a prize in the district level competition surrounding drawing and creative work.
Assistant headmistress of the school Indra said working on something meaningful is a practice as old as time in this school. Just a few days before the workshop our students were involved in making seedballs. We got seeds of vagai, kungaimaram, ilavupanju and many others from Coimbatore. 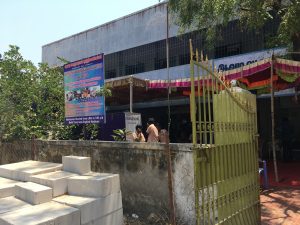 Our students actively involved themselves in wrapping the seeds in mud and turning them into balls. We made 1,342 seedballs in about two hours time. The intention is to distribute them to various people, she said. They can be used for good, they can be thrown in a empty space for instance, that could give rise to a plant which can turn into a tree which will add to the existing greenery only to benefit us, she reminded. Students were delighted when they received prizes from Sindhu in recognition of their work.
Share