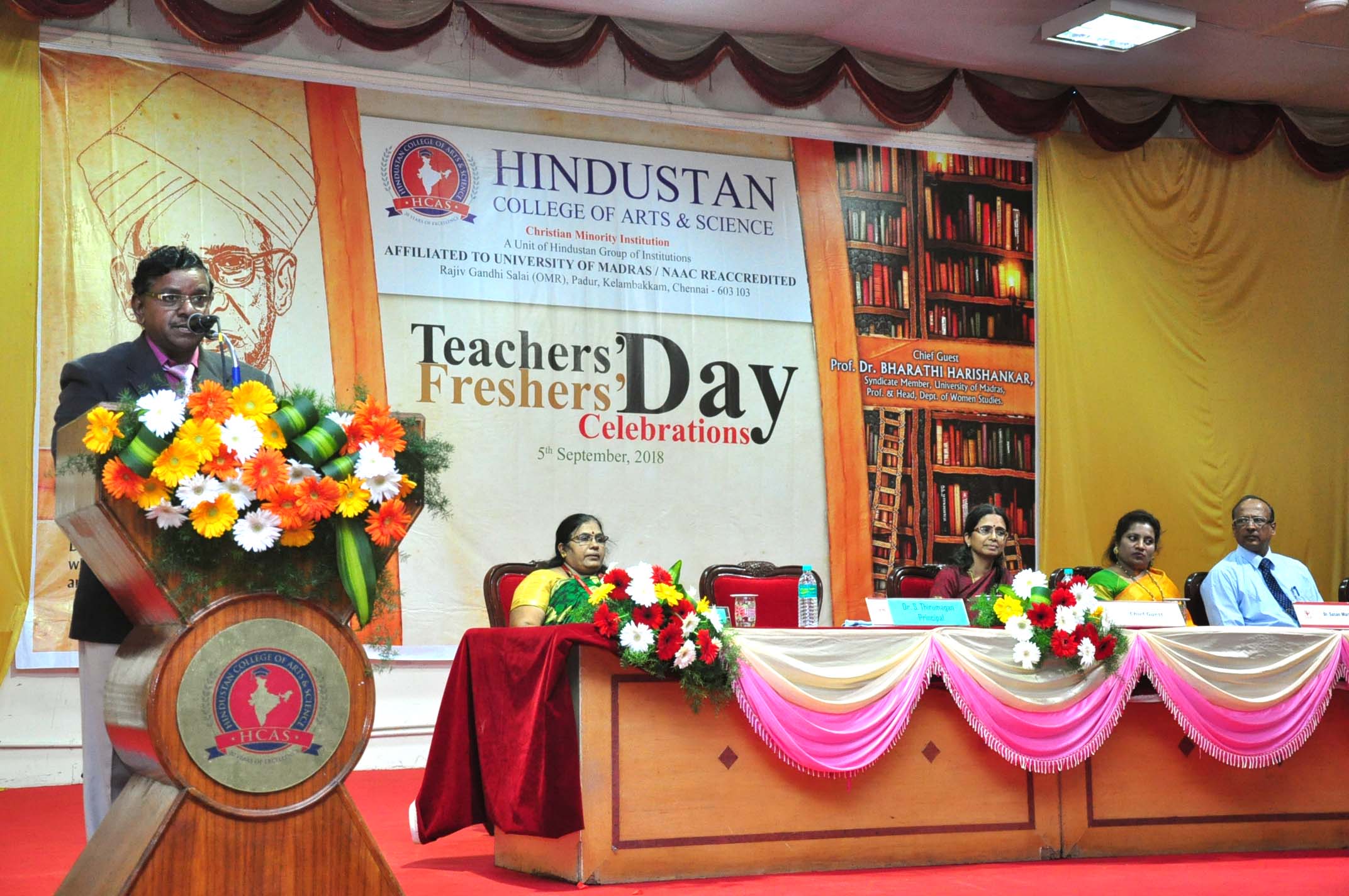 The HCAS conducted its teachers’ and Freshers’ day celebrations in its campus at MGR Hall in Padur recently, as Dr. Bharathi Harishankar, Prof. and Head Dept. of Women’s Studies University of Madras was the Chief Guest. Dr. S. Thirumagan, Principal, in his welcome address said, it is happy to have Dr. Bharathi Harishankar as she is a great personality in teaching and research and she is in the Board of Studies of Women’s studies and nominated Syndicate member of the University of Madras by Chancellor and Governor of Tamil Nadu, a wonderful role model. He is also proud to the teachers who works hard for the betterment of the students and the institution.

He quoted Dr. Radha Krishnan, the former president who said, that “we should not blame British as they left us” and also said of one more saying of Dr. Radha Krishnan. The students should be like Doberman dog in using their sense to use, hence, it has a great grasping capacity. He felt that result is not as good as teachers and students who worked hard together and then wished everyone a success as he ended. 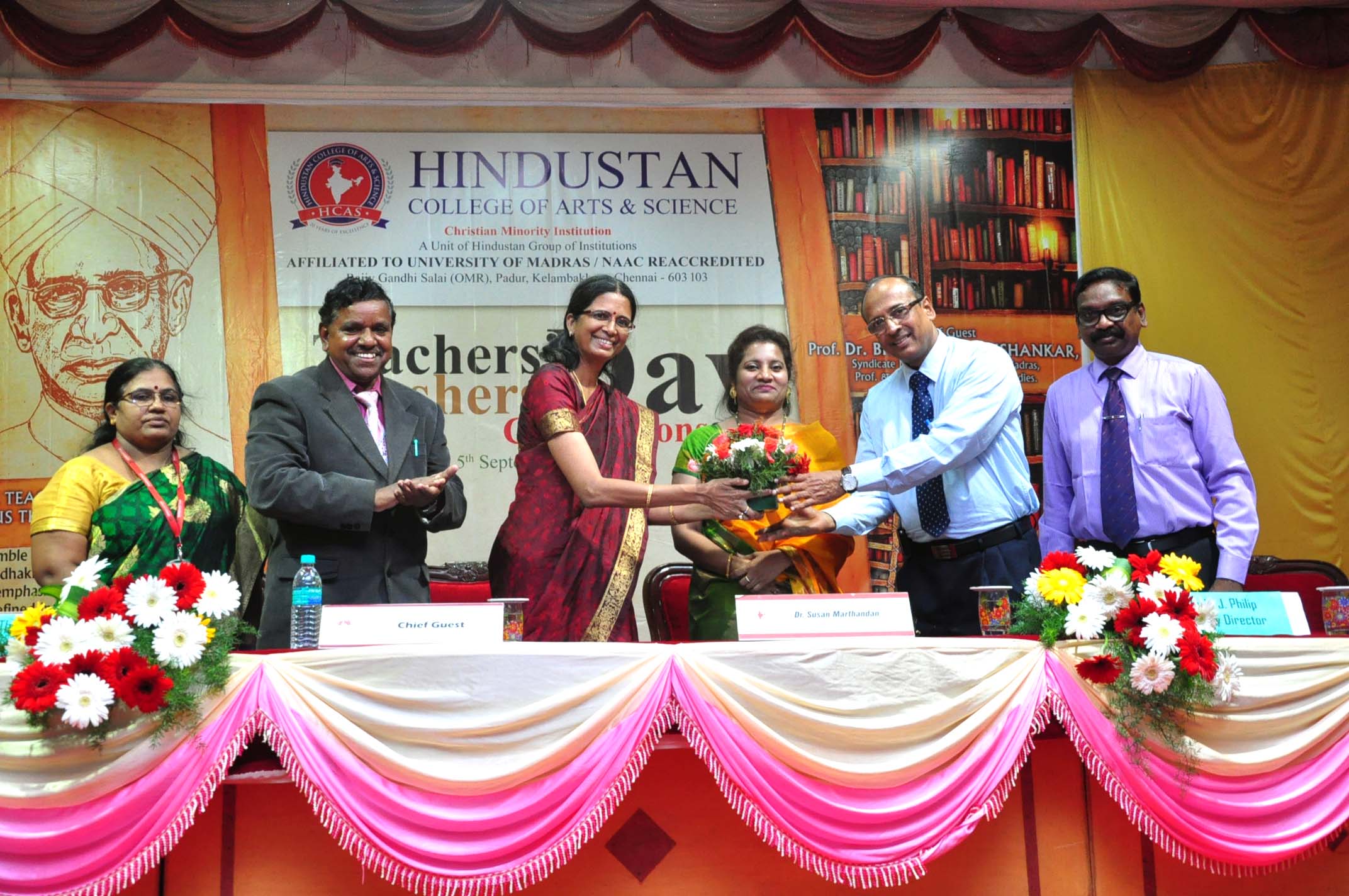 Dr. Bharathi Harishankar in her special address said, she is happy to be in Hindustan family as it is a good group as this college has been encouraging all first timer learners. She praised the Director for Organ donation message as society doesn’t talk of sex and topics as these. She quoted Dronacharya who is a guru and asked teachers to go beyond giving bookish knowledge. She scored good marks in mathematics and was in science stream but chooses English as she was enjoying it. She said knowledge is easier to get and wisdom is so rarity and spoke about knowledge that one gets from google and said how a teacher should use it effectively.

She said to students, “if we enjoy now we will work and we will enjoy for a lifetime”. Hitler misused knowledge she added and colleges should take university directives in a right way. She quoted Mark Twain on using knowledge and exhorted everyone to work hard, as she ended.

Dr. S. Ilanjiam Dean of Life Sciences, announced the awardees as she got one for 20 years service in college and read out names of 100% result winners in various departments in college in university exams as the dignitaries distributed certificates and prizes. This was followed by cultural programme and Mrs. Sakthi Prabha Dean of students proposed vote of thanks thanking the Chief Guest, Director Principal DD – Academics, VP Deans HODs and staff for making this occasion a great success. This ended following playing of national anthem.

She said how her father Dr. KCG Verghese passed away without getting kidney donor. Spain has higher organ donors and encouraged everyone to convey the message. She said, it is happy to have B++ in NAAC and asked everyone to take to PhD as university is making it compulsory more and more. HCAS is a ragging free campus and doesn’t tolerate students who doesn’t wear helmet and banned cell phone on campus. She praised the Principal and administration for NAAC and academics and wished them success.