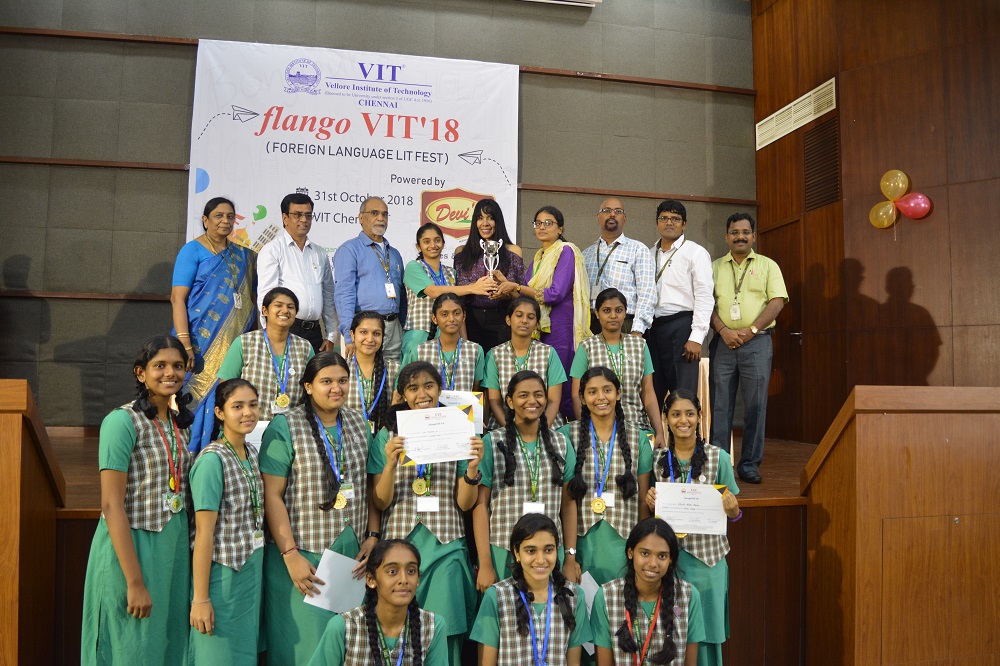 The Foreign Languages Division of the School of Advanced Sciences had organized flangoVIT’18, a foreign language lit fest at VIT Chennai on 31st October 2018. Knowledge of a foreign language gives the added advantage to the learner for they bring with them the ability to communicate in another language and also understand the culture and the way of people of other countries.

Realizing the potential benefits that learning a foreign language bring to its learners, many schools, colleges and universities have incorporated languages like German, French, Spanish and Chinese etc. in their academic curriculum. Creating a platform wherein they can use their language creatively was the main objective of flangoVIT’18.

Competitive rounds were organized in three languages namely German, French and Spanish. There were essay writing, poster making and oratorical competitions in these three languages. Students of Class IX to XII participated enthusiastically in these events and showcased their talent in speaking effectively in a foreign language. Singing and dancing competitions were also organized to encourage creativity and passion in students.

As a group, the students came up with wonderful numbers and dance performances that mesmerized the audience. Eighty seven students from seven schools in Chennai had participated in all these events. Ms. Liselott Benitez, Spanish Philologist from Instituto Hispania was the chief guest of the day.

Mr. R. Sampath Kumar was the guest of honour. Dr. N.Sambandam, Pro Vice Chancellor of VIT-Chennai presided over the fest. Prizes were given to all the winners of various events. The overall winner’s trophy was bagged by Sacred Heart Mat. Hr. Sec. School, Church Park. The runner’s trophy was won by Chettinad Vidyashram. Overall, the celebrations concluded on a happy note with the students rejoicing over the exposure, camaraderie and the love for languages.