Yet another year of achievements for IIT-M

One should become better and better with the passage of time. This seems to be true with regards to Indian Institute of Technology, Madras (IIT-M). Achievements upon achievements have adorned this institution since its inception.

IIT-M has yet another long list of achievements to its credit during 2019, which come forth on the occasion of the diamond jubilee celebrations of IIT-M. 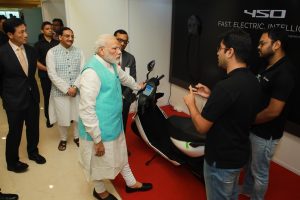 It has been ranked as the ‘Best Educational Institution’ in the country in the latest edition of National Institutional Rankings Framework (NIRF) 2019, which was released on 8 April 2019 by the Ministry of Human Resource Development (MHRD), Government of India.

IIT-M also emerged as the ‘Top innovative Institution’ in the country in the maiden edition of the Atal Ranking of Institutions on Innovation Achievements (ARIIA), launched by the Innovation Cell of MHRD in 2018, bagging the Rank No. 1 in Government Institutions category.

IIT-M was declared as Institution of Eminence (IOE) and this is yet another feather in its cap. This was announced on 5 September this year by Ministry of Human Resource Development.

The IoE initiative is part of a focused effort undertaken by the Government of India to improve the quality of higher education institutions and make them world class. The occasion turned momentus this year when Prime Minister Narendra Modi took part in the 56th convocation of IIT Madras held on 30 September this year.

Sponsored projects are RandD projects that are funded by government and other agencies with an aim of generating new knowledge to develop new technology or to create new product in nation building.

There are about 607 active sponsored research projects that (funded through government schemes) were taken up at IIT-M during financial year 2018-19, which is greater than 579 projects of financial year 2017-18. The amount materializedrobust

Further, researchers from IIT Madras also demonstrated the possibility of generating biocompatible lasers from carrots, exploiting a process first discovered by Sir C.V. Raman who won the Nobel Prize for Physics in 1930.

This finding by the IIT Madras team, promises significant advancements in scientific and industrial research on optical spectroscopy and sensing. Apart from being bio-friendly, the system they envisage is robust and reliable, with good and linear response to temperature.

Being completely natural and fully bio-compatible, this system can be used with other bio-entities for their sensing based on the proposed laser. Being very robust and highly reliable, this ‘kitchen laser’ has very good and linear response for temperature which could be used for temperature sensing too.

IIT Madras launched several new centres and initiatives under which the faculty, researchers and students will be working with the industry to solve problems. Among them is the Advanced Manufacturing Technology Development Centre (AMTDC) launched this year.

AMTDC brings the concept of Industry-Academia collaboration into reality and is set up in IIT Madras Research Park, a nodal infrastructure for academia-industry interaction under one roof to offer solutions for developing advanced technologies in capital goods manufacturing sector with the collaboration of industrial partners.