Indian Coast Guard is ever willing to help whenever there is a moment of crisis. This has been proved correct once again. This time fishermen who went missing at sea were rescued.

Sources from Defence Ministry said a motorised fibre boat ‘MaruganThunai’ with 10 people on board was on its way to Rameshwaram from Cuddalore when it capsized at Palk Bay. Soon after the message about the boat that went missing was received Coast Guard initiated Search and Rescue operation. 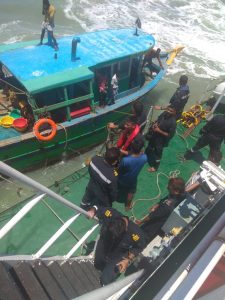 Search efforts by the Indian Coast Guard in coordination with local Coastal Security Group and fishermen despite rough sea and weather conditions in the area for six days, six survivors were rescued and four bodies were recovered.

The incident reportedly took place at about 12 noon on 3 September off Uchipuli whilst the crew were returning to Rameswaram in their newly purchased boat. The crew were holding onto a makeshift raft which they constructed using floating debris.

Two out of the ten crew swam towards a boat which they sighted on morning of 4 September and were subsequently rescued about 15 nautical miles off Mallipattinam.

Four of the remaining eight missing crew were rescued by ICGS Abheek on September 5 in coordination with local fishing boat. 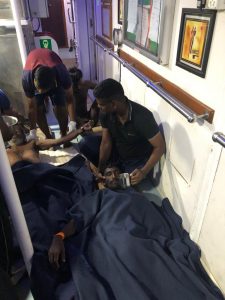 The rescued crew were provided first aid and medical treatment and later safely brought ashore. The search continued for another two days to locate the remaining four missing fishermen.

However, subsequently four bodies were recovered by ICG and CSG and handed over to their bereaved families.

Sources further say that the incident highlights the persisting problem wherein the fishing boats venturing out to sea do not carry basic communication set and operate in far areas beyond mobile coverage.

These boats are generally observed to be deficient in carrying the Lifesaving equipment such as life jacket, life buoy and distress alert transmitters (DATs).
This issue has been regularly highlighted during community awareness and interaction programmes that are regularly conducted by Indian Coast Guard.