Into Indian Navy with pride from INS Rajali

INS Rajali located at Arakkonam near Chennai rose to the occasion when passing out parade of 93rd Helicopter Conversion Course took place. The moment became special when nine pilots of Indian Navy were awarded prestigious ‘Wings of Gold.’

The pilots received the prestigious prize from Rear Admiral K Jyothish Kumar, Flag Officer Commanding Tamil Nadu and Puducherry Naval Area. He was the chief guest for the passing out parade.

The pilots underwent rigorous flying and ground training for 20 weeks at the Indian Naval Air Squadron 561, the Helicopter Training School (HTS) prior to the passing out parade. 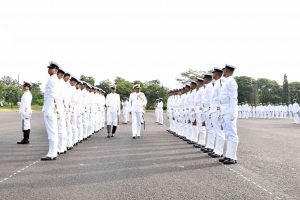 During the course, the trainee pilots are introduced to several nuances of helicopter flying. The pilots undergo a challenging syllabus including navigation, night flying and operations over sea.

At the end of the course, the trainees are adjudged for Best in Flying, Best in Ground Subjects and Best in Overall Order of Merit.

Chief Guest awarded the Governor of Kerala Rolling Trophy to Lt Pritish Mehta for being adjudged as the Best All Round Trainee Pilot and the Flag Officer Commanding-in-Chief Eastern Naval Command Rolling Trophy to Sub Lt Shantanu Misra for standing first in Order of Merit.

A book prize was also awarded to Sub Lt Mageshvar R for standing first in ground subjects. The newly qualified pilots will be appointed to various front-line operational units of the Indian Navy where they will take on various missions such as search and rescue, reconnaissance and surveillance and anti-piracy patrols.

In its rich heritage spanning almost five decades, INAS 561 (HTS) commanded by Captain Krishanu De has trained 724 pilots for the Indian Navy, Coast Guard as well as from friendly foreign navies till date. The school is located at INS Rajali Arakkonam, which is commanded by Commodore Shreerang Joglekar.