There is always a hand to help whenever a crisis situation pounces on us. This has turned right with the Indian Coast Guard (ICG) again. When cyclone ‘Kyarr’ struck recently ICG personnel lent a helping hand.

The maritime boundary safeguarding force rescued fishermen stranded in the sea. ICG has rescued 19 fishermen and escorted more than 2100 fishing boats to safety at various ports on the west coast part of our nation. 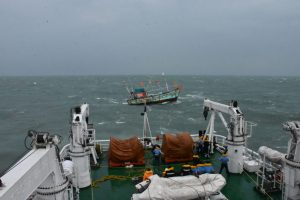 Sources further say ICG has been issuing weather warning since 18 October in this regard. Coast Guard ships, aircraft broadcasted messages to all seafarers in vernacular languages also to apprise them of the cyclonic weather and advised them to return harbour.

Coast Guard deployed 10 ships to locate fishing boats and to render assistance to fishermen stuck in the sea. Four ICG dornier aircraft have been put into service for locating stranded fishermen.