Armed Forces of India and Defence Research and Development Organisation (DRDO) share a bond inseperable, it can be said. This has come true once again.

Indian Army got a major boost thanks to DRDO. The prestigious establishment that caters to various requirements of our armed forces has successfully test fired ‘Fire and Forget Man Portable Anti-tank Guided Missile (MPATGM).’

This will be boosting the capability of our army. The missiles is said to have been successfully test fired in the ranges of Kurnool in Andhra Pradesh. The missile was launched from a man portable Tripod launcher and the target was mimicking a functional tank. 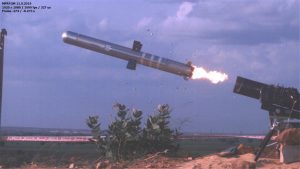 The missile hit the target in top attack mode and destroyed it with precision. All the mission objectives were met. This is the third series of successful testing of MPATGM. The missile is incorporated with state-of-the-art Infrared Imaging Seeker along with advanced avionics.

The test paves the way for the army to have developed third generation MPATGM that is made endogenously. Defens Minister Rajnath has showered praises on DRDO personnel upon the successful test firing.