S Vishnu Sharmaa, INN/Chennai, @infodeaofficial
India is always safe, thanks to ever-vigilant security forces. This point was proved beyond doubt once again when the Indian Army and J and K (Jammu and Kashmir) police foiled the attempt of terrorists who were making efforts to revive terrorism in the south of Pir Panjal range in Jammu and Kashmir. 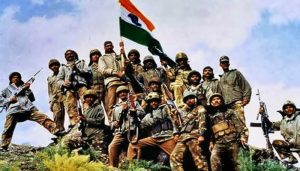 According to sources, the security forces conducted an operation on 13 May at the Harah village of Gool Tehsil in J and K during the early hours. Sources further pointed out the operation was conducted based on information from intelligence. The operation led to the apprehension of two suspected terrorists and recovery of one AK-47 rifle with ammunition, personal items and cash worth Rs 8871 from them.
Sources say both the terrorists were in teens and were about to join the terror outfit Lashkar-e-Toiba. The timely apprehension has thwarted their nefarious designs, say sources.
Share