The Union Home Minister Shri Amit Shah presented medals to the brave officers and personnel of the Border Security Force for their indomitable courage, valour, gallantry and outstanding service at the 18th Investiture Ceremony of the BSF in New Delhi today. The Home Minister also delivered the Rustamji Memorial Lecture. A documentary ‘Bawa’ on Border Security Force was also screened on the occasion. Union Ministers of State for Home Affairs, Shri Nityanand Rai and Shri Ajay Kumar, Union Home Secretary, Director General of Border Security Force and other senior officers also participated in the programme. 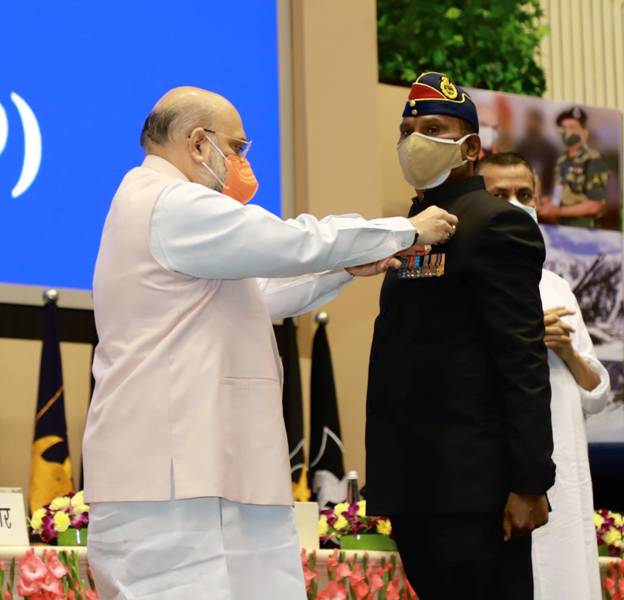 Paying tributes to the First Director General of BSF, KF Rustamji, the Union Home Minister said that it is only because of the sacrifices made by martyrs of the Border Security Force and other paramilitary forces of the country that India has been able to make its proud presence on the world map. Praising the Border Security Force, he said that the mere mention of your force strikes chill among the enemy and because of this our democracy is marching ahead on the path of development. Shri Amit Shah said that India is consolidating its place on the world map, and in this endeavour your contribution is very important and in the frontline. The Union Home Minister said that those martyrs, the braves and warriors can never be forgotten who even today, whether the temperature is -45 degrees or the heat of 45 degrees, be it the borders of Ladakh or the heat of the desert, whether it is the riverine territory, streams, forests or mountains on the eastern border, BSF and all our paramilitary forces are devoted to the task of border security. It is due to them, India today is registering its proud place on the world map. 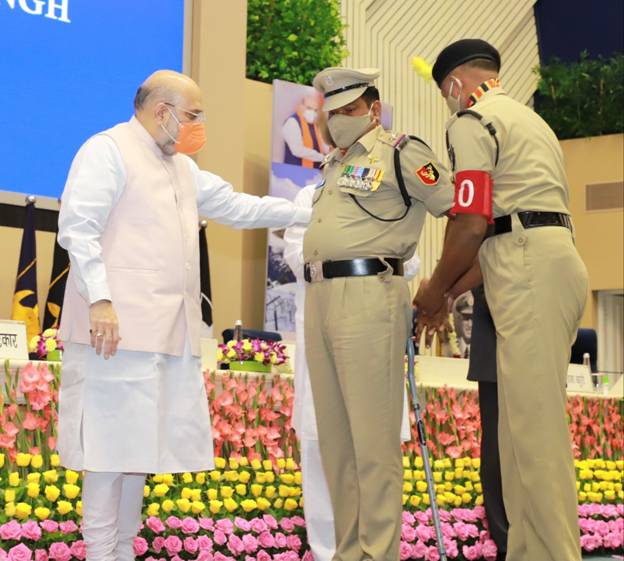 Shri Amit Shah said that late Rustamji raised such a force which has created a great pillar of fame with their sweat, dedication, hard work, vigilant and sacrifice which is evident in the secured borders running across thousands of kilometers. He said that After the 1965 war, the seed sown of the Border Security Force with 25 battalions in states on the border areas, the BSF has today grown into a banyan tree and this force, with a strength of 2.65 lakh soldiers, is providing security to the country.

The Union Home Minister said that BSF has established a tradition of supreme sacrifice. He said that just six years after establishment of the Border Security Force, when all kinds of human rights abuses were happening in the then East Pakistan, unimaginable tortures were being committed, and when the situation became unbearable then in that situation India took the decision and BSF jawans played an important role and today Bangladesh exists on the world map as an independent nation. Shri Shah said that be it in war time or peace,the BSF jawans have always left no stone unturned in the performance of their duty and as a result of this the Border Security Force has been decorated with many gallantry awards. 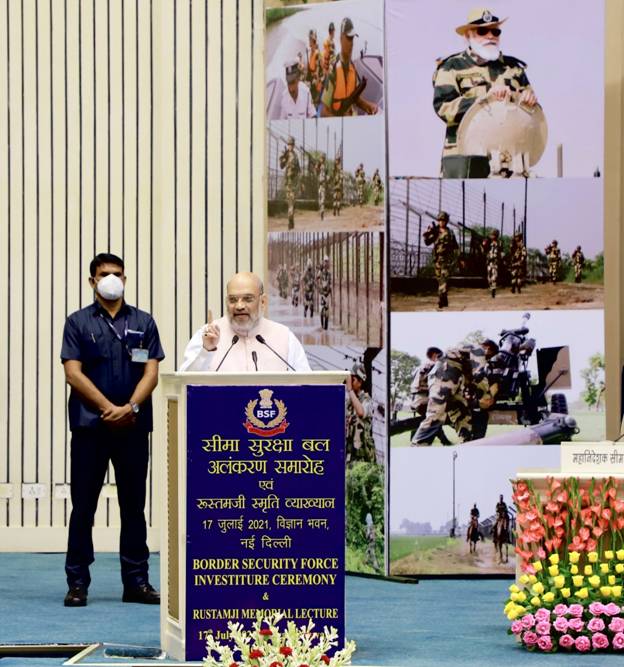 Shri Amit Shah said that since a long time, we have always been in a critical situation having to secure a coastline of about 7,516 km and a land border of more than 15,000 km and it was the time to pay attention to a structured border security, but for a long time there was no comprehensive policy. The Union Home Minister said that when Atal Bihari Vajpayee’s government was formed in the country, this task gained momentum. For the first time in Atal ji’s government, the principle of ‘ One Border, One Force’ was approved and a structured blueprint was started and each Force’s responsibility was fixed.

The Union Home Minister said that the Modi government has given priority to the work of infrastructure on the borders. He said that if we make a comparative study, 3,610 km of road length was constructed during the years 2008 to 2014 while 4,764 km road length has been laid during 2014-2020. Similarly, the budget for road construction increased from Rs 23,000 crore during 2008-2014 to about Rs 44,000 crore during 2014-20. He said that it is the vision of the Prime Minister that unless the basic infrastructure of the borders is improved, there will be migration from there and eventually it will become very difficult to protect the uninhabited borders.

Shri Amit Shah said that during the year 2008 to 2014, 7,270 meter long bridges were built while it doubled to 14,450 meters during the years 2014 to 2020. During the year 2008-14, only one tunnel was constructed, while between 2014 and 2020, six new tunnels have been built and work is in progress on another 19. Listing out another important data, the Union Home Minister said that to fill the gaps in border fencing, the Modi government removed the bottlenecks by opening lines of communication. He assured that by 2022, there will be no remaining gaps in border fencing. He said that only this three percent gap leaves possibilities for infiltration and renders useless the remaining 97 percent of fenced border.

The Union Home Minister said that the Modi Government has undertaken several schemes for development of Border Areas and to check migration from theses remote areas. For this, Border Development Projects worth Rs.888 crore have been initiated during a two year period. He said that the Modi government has done the work of assigning all paramilitary forces as nodal agencies. He said that a Border Areas Development festival, ‘Seemant Vikas Utsav’ started from Kutch in Gujarat. Under this programme, the Sarpanches and Tehsildars of villages adjoining the Kutch borders were invited and issues regarding their development were identified. This will definitely lead to development of villages and stop migration from there. Shri Amit Shah said that the government has ensured better infrastructure to the border areas, developed the villages, provided a good work culture to all the paramilitary forces, understood their needs, filled the vacancies there and moved ahead with a well-planned strategy. Shri Amit Shah said that prior to the Modi Government, we did not have a sovereign Security Policy and whatever policy was there, it was influenced by the Foreign Policy. After Modi Government, we now have an independent Security Policy. He said that without an effective Security Policy, neither can a nation develop nor democracy survive. Shri Amit Shah called upon the Security Forces to make efforts that will check migration from villages located in the frontier areas because it is our responsibility to ensure all development schemes reach these areas and migration stops.

Shri Amit Shah said Border Security means National Security and a country whose borders are not secure, that nation cannot remain safe. Referring to the challenges like infiltration, human trafficking, cattle smuggling, arms smuggling and drones, Shri Amit Shah exuded confidence in the vigilance of the paramilitary forces of the country and their ability to adapt to changing environs and said that by overcoming all these challenges, we shall secure ourt borders.

The Union Home Minister said that the Border Security Force has done a great job by detecting many tunnels and undertaking their scientific analysis. He said that our campaign against the growing threat of drones is very important today and to check it, the DRDO and other agencies are working on indigenous technology and border deployment will be reinforced soon with the deployment of indigenous anti-drone system.

Referring to the achievements of the security forces, the Union Home Minister said that the BSF seized narcotics worth Rs 15 billion, gold and silver worth Rs 4.5 crore, killed 15 terrorists and apprehended about 2,000 terrorists and infiltrators. He also cautioned against the looming threat of cross-border artificial intelligence and robotics technology and stressed upon the need for a long-term plan to tackle it. Shri Shah said that the security forces have also done a very good job in the anti-Naxal operations.

Shri Amit Shah said that a series of hackathons on topics like Detection of Electronic Devices, Detection of Tunnels, Portable Encrypted Tactical Mobile Communications and Anti-Drone Techniques will be beneficial. He said that we want to be self-reliant in all the necessary materials and technology regarding Border Security and the hackathon series will go a long way in achieving this goal.