There has been huge controversy going on in the Congress and other parties. Due to the dilemma in which Sachin Pilot is trapped for the party but as per the sources on Wednesday.

Sachin Pilot cleared that he would not join BJP, the options left before he could be to join a non-BJP party or float his own political outfit, in case he decides to leave Congress or the party expels him in the coming days.

Rajasthan, however, has been unreceptive to both the ideas. Since independence, the state has elected a Congress government or a BJP one.

Leaders who formed their own outfits were largely rejected by the people. Be it Ghanshyam Tiwari, Kirodi Lal Meena, Devi Singh Bhati, Lokendra Singh Kalvi,  Hanuman Beniwal, all have met the same fate. 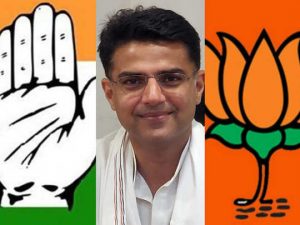 In the run-up of the 2018 Assembly Elections, Tiwari split from BJP following his prolonged tussle with Chief Minister Vasundhara Raje and floated his own Bharat Vahini party despite his long political career in the state during which he was rejected by the people, Tiwari ultimately joined Congress.

Before him, Kirodi Lal Meena split with the BJP and joined the national people’s party (NPP) of former Lok Sabha speaker P A Sangma.

Meena tried to create a third political front as an alternative to Congress and BJP in the state but failed to do so. In 2013  the tribal leader could win just 3 seats. Mina returned to BJP before the 2018 polls and is currently the party’s Lok Sabha MP.

Even as the veterans were failing In posing a challenge to Congress and BJP in the state politics, Beniwal, the young Jat leader took the plunge and founded The Rashtriya LokTantrik party (RLP) in 2018.

Despite commanding a large following among the youngster’s office community, which is the largest in the state, Beniwal party too was restricted to just 3 seats In the Assembly.

Soon he joined hands with BJP and added one Lok Sabha seat also to the RLP Tally in 2019. Even as a section of leaders within the Congress feels that Sachin Pilot has gone too far especially after he took the party to court over the disqualification issue, sources on Thursday said the top party leadership is still keeping the doors open for him and has also asked Rajasthan CM Ashok Gahlot to not make critical comments against the former Deputy chief minister Sachin Pilot.