Will there be a collective effort to maintain the sanctity of educational institutions? 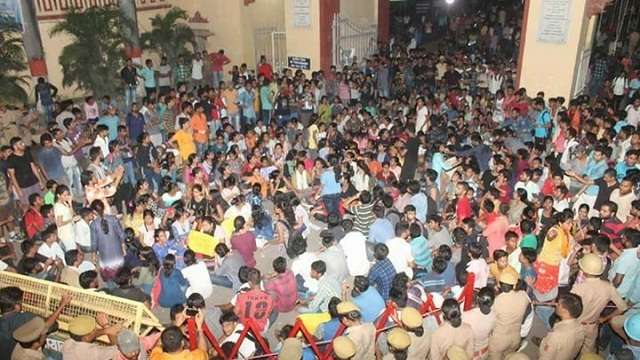 Banaras Hindu University, the very name evokes image of the freedom struggle and the effort of moulding the youth so he would remain strongly loyal to the country. What perhaps aided this goal then was strong respect of students towards teachers and university management had for each other.
Presence of a powerful common enemy in form of British made the three essential elements remain loyal to each other. No one wanted to betray the other or violate rules, for they felt that would harm their country and themselves. There was a sense of morality. But with the British leaving this nation, gone is the powerful enemy who kept us united, compelled us to remain in harmony with our culture and fellow human beings. Today one does no longer feels the need to be loyal to each other, to the culture of this land, to the nation as there is no formidable danger in the form of English. This in a way has led to a spade of demoralization both in public and private lives.
The recent unfortunate events at the prestigious institution reflect it. Today the college managements feel it a headache if their students complain about any grievance.
Educational institution managements are mostly law unto themselves, students on the other hand are not willing to take a back seat when it comes having their voices heard. And what such kind of situations does is to obviously lead to confusion and dissatisfaction.  The university administration’s mishandling of the case has led to widespread disenchantment amongst the masses needs no mention, so how did it all start? According to a section of the hostel girls, the warden of the hostel reprimanded some of them for coming late which did not go well with the inmates.
When the news spread more students pitched in resulting in a clash between the police and the students. The chief minister of UP Mr Yogi has ordered a high level probe which is expected to submit its findings sooner than later.
The fact that the incident has happened right in the PM’s constituency has added fuel to the fire with the opposition making use of the opportunity bestowed upon them, the removal of five police officials involved in the clashes shows that some action has been taken as it remains to be seen.
It may be noted here that last year some women students were suspended for staging a dharna demanding better facilities such as high speed internet access and better quality food in the hostel.
The non-bothering and only rule imposing attitude of the Indian varsities are the root cause of such problems and the need of the hour is to sensitize various administrations to understand the changing attitude of today’s youth and also take steps to improve the living conditions of the hostels with modern facilities.

Inculcating self – reliant spirit amongst the students is also a pre-requisite for avoiding such mishaps, previously in universities such as Gandhigram Rural Institute there used to be compulsory chores such as cleaning toilets, gardening, and other menial jobs, which sadly is missing in the universities of today.