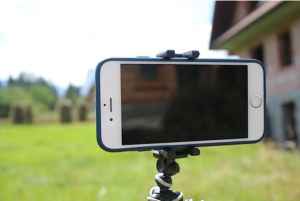 When a Dutch journalist Trian Speil first started using his mobile phone to cover a football match, many eyebrows were raised and people thought he was crazy. Speil noticed that the footballers were not bothered about the device that was recording their game, His act of recording the match using a handheld device made Speil realise that it does not alter the sanctity of journalism. And that was how mobile journalism or MoJo as it is called, came into existence.

The technological transformation of mobile phones and multimedia has been taking place for a long time. But it was until the birth of the commercial touch screen mobile devices offering flat subscriptions of the internet that excellent spread production and creation of news content began to flourish.

Mobile phones now act as critical equipment in the media industry. Not only did it change the way viewers or readers consume news but also paved the way for the future of content mediums and types. Accessing mobile phones news application have also gained traction from the everyday lives of people.

Mobile journalism is an emerging form of news media storytelling where reporters use portable electronic devices with network connectivity to edit and distribute news and is fast catching up.

One of the first instance of mobile journalism recorded is from wearable technology pioneer Steve Mann as a feature in a personal visual assistant he designed, he identified as a roving reporter.

In the beginning, he faced concerns. He then responded by writing on The Tech of MIT on July 24, 1996, as a guest column “Wearcam Helps Address Privacy issues. In the column, Steve stated he was wearing his experimental eyeglass to bring awareness to the huge and growing number of surveillance cameras that were watching over citizens activities, MoJo has now become an essential part of skill for journalists.

MoJo in India has caught up with the rest of the world and the endless streams of news and first-hand accounts of events around the country are testimony to its proliferation even at the grassroot levels.

Today, the biggest challenge facing the news media houses is the changing means of distribution of news through the mobiles, which deliver news at a greater pace in more accessible formats and when consumers demand them.

The number of Smartphone users in India is expected to rise by 84 percent to 859 million by 2022 from 1,161.7 million in 2019, according to a joint study by the Associated Chambers of Commerce and Industry of India and PWC.

And India has the world’s highest data usage per Smartphone at an average of 10.4 GB per month in 2019, Swedish telecom equipment maker Ericsson said adding this will double to 18 GB by 2024, fuelled by rich video content.

India’s data consumption has exploded, largely due to Reliance’s Jio’s entry in the market in September 2016, with all other operators also offering cheap data tariffs.

Mobile data traffic is growing as more Indians spend time streaming videos, which is expected to account for 75 percent of overall mobile traffic by 2024. The rapid growth in especially mobile internet use in India in recent years has been accompanied by a boom in news digital journalism. More and more newspapers are shifting to digitalized versions.

Indian media, to have started to realise the potential and usage of MoJo in the media industry. Few renowned Indian media houses have already begun working towards adopting the new practice, A number of media organisations have also developed mobile applications to provide on-your-fingertips services to its consumers,’Growing trends in internet connectivity and Smartphone handsets stands as a major factor to support the MoJo as an upcoming journalism practice in Indian media. Media organisations have just begun with experiencing cultural shifts in their newsrooms, Once MoJo starts to expand its empires, the existing newsrooms are expected to undergo a major and more-in-depth cultural shift in terms of practices, equipment and editing procedures, MoJo has introduced the Indian media to a new trend, The organizations, as a result, are undergoing and experiencing cultural shifts, but not all the Indian media have been exposed to the possibilities of employing the method, Still, a larger set of audience in India consume news information on the television and newspapers.

But with the growth of mobile phone companies and internet service providers, India makes a rich and potential state for MoJo and accepted by the Indian media sooner or later.

KS Shankar is a senior journalist with over three decades of experience on the copy desk, field reporting and writing for India’s premier English language news agency, PTI, at its Delhi headquarters.