A Youth Wing team, Chennai chapter held an exclusive event called NAYOME 2019, a national youth meet that was hosted around 600 + prominent and dynamic youth ages between 18 to 36 years along with 200+ accomplished and inspiring icons of the Jain fraternity for two days. The event was held last July 13 and 14, 2019. NAYOME 2019 was hosted by JITO Youth Wing of Chennai Chapter, part of a not-for-profit community organization called JITO (Jain International Trade Organization).

The objective behind NAYOME 2019, is to provide a platform to connect the youths from across the globe with maximum participation within India, to facilitate their interaction with other like-minded people and intellectuals and to enable them to explore opportunities for building their professional and personal network and to engage, exchange and empower the youth across all JITO youth wing chapters in India.

In behalf of JITO Youth Wing-Chennai Chapter, take immense delight in introducing JITO to you JITO or the Jain International Trade Organization is a pan world, unique and a multi-stakeholder community of visionary Jains who share a commitment to shaping the future. It’s the single largest organization of prominent Jain businessmen, industrialists and professionals worldwide with current members nearing 15,000 in number. The members are highly accomplished and eclectic in their respective fields. In a span of ten years, JITO has established many notable benchmarks in the vast landscape of professional and non-governmental organizations.

About the JITO Youth Wing:
It is an extension of JITO Apex, the foremost and biggest platform for young Jains to leverage their skills and hone them to become a dynamic force in their enterprises. The JYW has been working relentlessly towards bringing the next generation of young Jains into the mainstream with the purpose of enabling them to become better professionals, ethical leaders, and contributors for the development of our community, our country and the world at large. 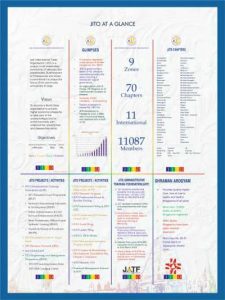