As part of the World Diabetes Day 2018, Dr. Mohan’s Diabetes Specialities Centre (DMDSC), conducted a first of its kind press conference in Chennai to create awareness in the various forms of Monogenic Diabetes. Young patients with diabetes who are successfully undergoing treatment were also present at the conference to share their experience and educate the gathering on the importance of accurately diagnosing these relatively rare forms of diabetes known as ‘Monogenic Diabetes’. DMDSC and its sister institution, Madras Diabetes Research Foundation (MDRF) also announced the formation of the National Monogenic Diabetes Study Group of India. 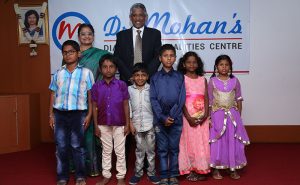 The two most common forms of diabetes are type 2 diabetes and type 1 diabetes. Both of these are polygenic disorders which means that several genes are involved and in addition, environmental factors also play a very important role in their etiology. And on the contrary, Monogenic Diabetes is a group of disorders where mutation of a single gene causes these forms of diabetes.  The 3 most common form of monogenic diabetes are 1) Maturity Onset Diabetes of the Young (MODY), 2) Neonatal Diabetes Mellitus (NDM) and 3) Congenital Hypoglycemia (CH).

MODY comprises at least 14 subtypes, of which MODY 1 and MODY 3 is the most common form. Patients with these forms of MODY are usually mistaken to have type 1 diabetes (insulin-dependent diabetes) and have been prescribed a  lifelong insulin injections dependency. However, if one studies, the clinical profile of these patients, and more importantly, does a genetic test, it can be proved that they have MODY and not type 1 diabetes. The good news is that patients with MODY can stop insulin injections and be switched over to inexpensive sulphonylurea tablets. This can be life changing as far as the individual and the family are concerned.

Even more dramatic is the case of Neonatal Diabetes Mellitus (NDM), which is defined as onset of diabetes below 6 months of age. These neonates are also usually diagnosed to have type 1 diabetes and asked to take insulin injections several times a day.  If genetic testing is done in these individuals and certain specific mutations are detected, the insulin injections can be stopped and they can be switched over to oral sulphonylurea treatment. This is nothing short of a miracle. Hundreds of children who are suffering from this kind of genetics have been referred to Dr. Mohan’s Diabetes Specialities Centre and the Madras Diabetes Research Foundation from all over India for genetic testing and many have been successfully converted to sulphonylurea tablets and were able to stop insulin injections completely.

Children with Congenital Hypoglycemia (CH) have the opposite condition of neonatal diabetes. From the time of birth, these babies have severe low sugar reactions. They may present with epileptic fits and other symptoms of low sugar. Many of them can be treated with a medicine called  ‘Diazoxide’,  while some have to undergo a partial removal of the pancreas (Pancreatectomy). Again, in these neonates with CH, definite genetic mutations are present.  And at Dr. Mohan’s Diabetes Specialities Centre and the Madras Diabetes Research Foundation, over the past several years, many cases of MODY, neonatal diabetes, and congenital hypoglycemia have been successfully treated.

Dr. V. Mohan, Chairman of Dr. Mohan’s Diabetes Specialities says, “more research is needed on monogenic forms of diabetes. We have seen a steady increase in children suffering from this form of diabetes over the last few years due to better awareness and detection. We are happy that the Indian Council of Medical Research (ICMR) has made MDRF,  the Coordinating Centre for the  ‘National Monogenic Diabetes Study Group of India’. This is the need of the hour and will surely help advance research in new avenues of treatment for the different kinds of monogenic diabetes like MODY and neonatal diabetes”.

Dr. Ranjit Unnikrishnan, Vice Chairman, DMDSC said, ”With the advancement in technology,  today, by doing a genetic evaluation, it is possible to accurately diagnose all the monogenic forms of diabetes. This has great clinical significance because patients with monogenic forms of diabetes can be mistaken for type 1 diabetes and may be asked to take lifelong insulin injections. When diagnosed correctly, these young children can be provided with effective treatments that will enable them to enjoy a fulfilling and normal life. “

The Indian Council of Medical Research (ICMR) has nominated the Madras Diabetes Research Foundation and Dr. Mohan’s Diabetes Specialities Centre as the ‘National Coordinating Centre for the ‘National Monogenic Diabetes Study Group of India’. Several top institutions, diabetologists, and endocrinologists, including many prestigious medical colleges all over India, have consented to be members of this study group.