As we all are aware that there has been a Coup D’etat in the Madhya Pradesh elections that is the government changed from Congress to BJP, so both the  Ex-CM and the current CM nowhere get deviated from their path in slamming each other.

Recently Shivraj Singh Chouhan on Thursday took a dig at the previous Congress government and sought its reply on why it failed to help farmers with a debt of rupees 2,00,000.

Chouhan also mentioned that earlier he asked three questions from Kamal Nath and now he is asking why did the Congress government betray the farmers.

He also stated that Congress had made false promises to come to power in the state it has promised that loans of all farmers would be waived off but later on, after coming into power it started making excuses.

And as per the report, it is also being said that Kamal Nath refused to fulfill the promises made to the farmers. Chauhan also made some kind of satire stating that the BJP government won’t be behaving like how the Congress did and he also said that they won’t let the farmers suffer anymore. 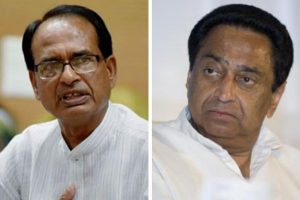 Opposing through this statement Ex-CM Kamal Nath also said that instead of lying about farm loan waiver Shivraj Singh Chauhan should tell that when his government will implement, The final phase of the scheme.

He also put seven elevations by stating the 2008 Assembly Elections,  BJP promised to waive rupees 50000 from farm loan taken by farmers but one day returned to power Chauhan made a volte-face and forgot about the promise.

“The senior Congress leader said that within two hours after his swearing-in as CM of the state,  he took the decision to waive off farm loans up to rupees 2,00,000 of farmers we don’t make fake promises,” Nath said.

Adding that also said  “Congress has never betrayed farmers neither in the past nor in the future it will.  through the reports, it is also being said that the file for farm loan waiver was signed within 2 hours after Kamal Nath took the Chief Minister’s office oath, Congress leader Nath also stated a satire on Shivraj Singh Chauhan saying that” Till the time he doesn’t speak 100 lies Chauhan cannot stop”.

There have been many arguments between both of them like these as we can see a few times back also Sh. Kamal Nath blamed Sh. Shivraj Singh Chauhan for collapsing his M.P government.