Nitish Kumar was born on 1 March 1951 in  Bakhtiarpur, Bihar to Kaviraj Ram Lakhan Singh, who was an ayurvedic practitioner and Parmeshwari Devi. He is a graduate in Mechanical Engineering from Bihar College of Engineering. Before entering into politics, he was associated with the Bihar State Electricity Board. 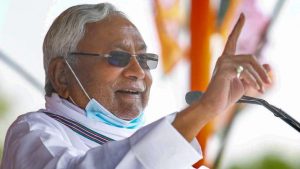 In his early years, Nitish Kumar was associated with Jayaprakash Narayan, Ram Manohar Lohia, S. N. Sinha, Karpuri Thakur and V. P. Singh. During 1974 to 1977, he participated in Jayaprakash Narayan’s movement and joined the Janata Party which was  led by Satyendra Narain Sinha.

After the 2 August 1999, Gaisal train crash, he resigned the post of  Union Minister of Railways. During his tenure as the Union Minister for Railways, he brought in widespread reforms including internal ticket booking facility in 2002 and tatkal scheme for instant booking of tickets.

Nitish Kumar contested elections from two constituencies in the 2004 Lok Sabha. He lost his traditional constituency.

In 2015, he was again elected as the Chief Minister of Bihar. When corruption charges levelled against Tejashwi Yadav, the then Deputy CM of Bihar, Nitish Kumar asked him to resign from the cabinet, to which RJD denied.

Following the denial, Nitish Kumar resigned from the Chief Ministerial post on July 26, 2017, ending the Mahagathbandhan and joined principal opposition, the NDA. He again became the Chief Minister of Bihar and serves to date on this post.

Nitish Kumar is the current and 22nd Chief Minister of Bihar. He is the second longest-serving CM of Bihar. He is associated with Janata Dal (United) party and has also served as a minister in the Union Government of India.

On 16 November 2020, Nitish Kumar sworn-in as the Chief Minister of Bihar straight for the fourth time.