Malnutrition has surrounded India for decades. It is now a very common word to listen to. Malnutrition is basically lack of nutrition in a child. It majorly occurs when the body doesn’t get enough nutrients according to the requirement of the body.

Instead according to a calculation about one-third of the malnutrition children of the world live in India only.

There is a large bridge of economy between rich and poor in India which is the main and the most important cause of this. Economic inequality has created a situation where half of the poor children are under-nutrition and every third child among the rich is over-nutrition.

Some main causes of the disease are the lack of food in poor families in terms of both quantity and quality.

Also, under-nourished pregnant women during pregnancy affect the health of the baby very much. This is something which is when once established in a person of a family which is acquired by the generations of that family.

According to research by Lancet Child and Adolescent Health Assam, Bihar, Uttar Pradesh, and Rajasthan are the most malnutrition states of India. Among these four Assam is on the top in factors of malnutrition children. Despite this, there is a drop in disease burden and death rate. 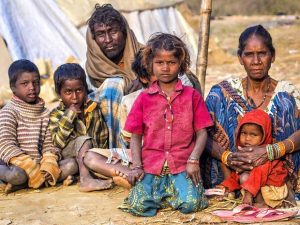 This disease is still an underlying risk factor for 68% of the deaths among children of age group 0-5.

The problem is not at its peak and needs to be resolved as soon as possible. Resolving it is not very difficult but the thing that needs to be kept in mind is the system has to work together and with all their honesty and kindness irrespective of their own greedy nature.

The Government of India has launched many programs to get rid of this drastic problem. Some of those programs include ICDS (Integrated Child Development Scheme), NCF (National Children’s Fund), and many other National health missions.

The Midday Meal Scheme in school is a great initiative, provided by the government which was first started on the occasion of Independence day of 1995.

It serves millions of children with fresh and nutritious food. This program also has a positive side effect, in agreed to get lunch many children have started going to schools and are keeping their steps forward towards their own personality development.

Many other foundations apart from the government are also contributing towards making the country free of Malnutrition, like ISKCON Food Relief Foundations, etc.

ICDS was started by the government of India in 1975 under which the mothers and children of age below 6 are provided with all general facilities like Education, Food, health, nutrition, etc.

This program is run by the Central Government under the Ministry of women and child development.

The scheme is working at its highest pace, but the only challenge faced by them is they need to think about how they can increase the efficiency and impact of the program.

NCF provides funds to the voluntary organizations that seek to help the poor and overcome the national problem of Malnutrition. This was established during the International year of Children in 1979.

UNITED NATIONS CHILDREN FUND department of women and child development are working extensively on the development of children and vanish the problem of Malnutrition from the world.

Other than these acts by the government, common people from their houses should come out and help at least some of the neediest according to their capabilities.

Also, the government can’t play any big role to break the bridge between rich and poor, but they themselves have to finish that difference.