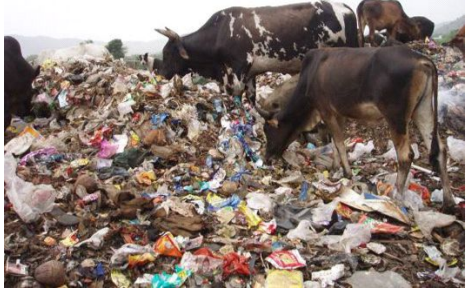 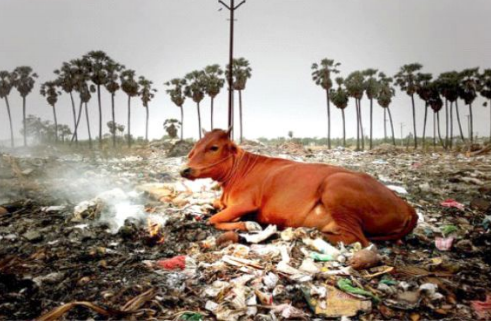 India is home for one of the greatest vegetarian population in the world. And with half a billion cattle, India is also the number one beef exporter in the world ahead of Brazil, Australia, and a few other countries. It also has the maximum number of dairy farms in the world.

However, the survival is not that easy as the cattle, strayed or domestic, can be seen gazing on piles of garbage strewn on roadside and dump yards. The open garbage disposal in India is a huge threat to the well-being of every stray animal. Stray cows and bulls on the streets chew on anything from the open waste dumps in search of something edible for their survival.

To add more to the misery, humans throwing their wastes in knotted plastic bags which ends up being the food for cows as unable to tear open the bag, they end up swallowing the entire plastic pack. The sad part is that these cows or bulls are not always strays as most of them are owned by milk vendors and dairy farmers who instead of feeding them fodder, let them loose on the streets to look for free food.

Delhi-based animal rights activist Rukmini Sekhar, associated with the Plastic Cow Project feels that it’s important to ask why we see so many cows wandering around as scavengers. “The consumers of dairy products can’t remain aloof from state of the cows. The butchers don’t produce milk, let them out on the streets to eat garbage, even the dairy farms let their cattle feed the trash on the roadside. They don’t want to spend a penny on fodder. And, once the cows stop producing milk, they end up at the butcher’s place.”

What people fail to understand is that it’s not just the cows who suffers but the milk produced is also adversely affected because of the germs and toxins which is finally consumed by people.

In 2012, filmmaker Kunal Vohra made a documentary on the subject. Titled ‘The Plastic Cow’, the film showed how up to 53 kg of waste was extracted from an animal. Recently, Prime Minister Narendra Modi also pointed out the reason for the mortality rate of cows due to plastic consumption than slaughter houses.

However, the government has done little to ban plastic bags in the country to prevent cows, other domestic animals, and other herbivores feeding on plastics.

There are many instances of animals dying a painful and unnoticed death due to plastic consumption. Recently, an elephant was found dead with 750 kg plastic inside its stomach. The plight is the same when it comes to dumping wastes in water bodies affecting fishes, turtles, birds, wild pigs, which has aggravated into a situation where no animal can escape!

We as a society need to come up with better ways to end this intense form of cruelty towards animals by saying ‘No to the plastics’, and discard plastics in a way which prevents animal consumption.