S Vishnu Sharmaa, INN/Chennai, @infodeaofficial
The fame of Indian Coast Guard has crossed the boundaries of this nation, its expertise is recognised worldwide. The proof for this was available in Chennai. Coast Guard of Bangaldesh came to Chennai to get trained in handling Maritime Rescue Co-ordination Centre (MRCC) and Search and Rescue (SAR) operations.
Indian Coast Guard’s eastern region staff will be training the Bangaldesh Coast Guard personnel from 11 to 16 March, five officers and personnel in ten other ranks will undergo the training. 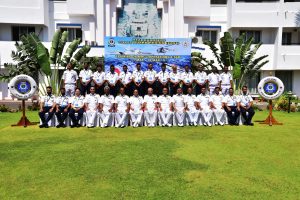 Special emphasis in the training will be given to the issue of handling  MRCC equipment and co-ordinating various types of SAR cases, whilst operating the Inmarsat and Global Maritime Distress and Safety System which are fitted in the control room of MRCC in Chennai.
Coast Guard Region (East), Chennai has undertaken the first ever training programme for Bangladesh Coast Guard Officers and personnel on MRCC operations and SAR as part of the International co-operation between India and Bangladesh, where in, the Government of India had agreed to train the Bangladesh Coast Guard personnel.
Both India and Bangladesh have been working closely on issues of co-ordination for Search and Rescue operations, Maritime safety and security in the Indian Ocean.
Indian Coast Guard has been entrusted with multifarious tasks ranging from maritime law enforcement and security, marine environmental protection and the most important charter of ensuring safety of lives and property at sea.
The Indian Coast Guard has an established SAR coordination system manned round-the-clock through MRCC, Chennai for quick response to distress incidents at sea, for the entire Bay of Bengal Area.
Share