S Vishnu Sharmaa, INN/Chennai, @infodeaofficial
One can never forget the unprecedented rains that battered the southern Indian state Kerala. But as saying goes where there is trouble…there should be someone to lend a helping hand.’ This has turned true as the popular NGO Sevalaya in association with Fiat Chrysler Ltd came forward to help. 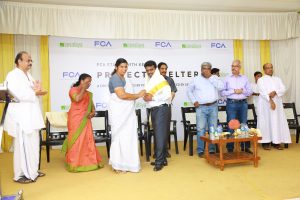 The southern state also popularly known as God’s Own Country was fortunate as many came to assist the state in getting back to normalcy. Sevalaya commenced rehabilitation work soon after the incessant rains came to an end in the Idukki district of Kerala. This district was said to be the most affected.
Post damage assessment it was known that many people were deprived of homes owing to the heavy rains. They lost their places of living. Sevalaya in association with Fiat Chrysler Ltd, a well-known automobile company funded a sum of Rs 1.2 crore for the construction of the dwellings, stated a press release.
The work was taken up under the name ‘Shelter project.’  Dineshan, district collector, Idukki, said efforts of Sevalaya and Fiat Chrysler deserve a pat. This is a valuable help being rendered to the flood affected. He distributed the Houses to the people by handing over Keys of the allotted houses. 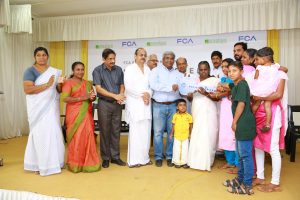 Ramesh Googuny, director, Fiat Chrysler, said that contrary to their CSR practice, they chose to fund this ‘Project Shelter’ in view of the serious damages that caused due to the rain and floods causing landslides that battered last year. He appreciated Sevalaya for its initiatives and executing the project in a systematic manner.
V. Muralidharan, founder and managing trustee, Sevalaya, mentioned about the financial contribution that poured in for the project. The contribution enabled us to achieve the noble intention, he said.
Share