They are for serving the nation, Air warriors inducted into IAF

S Vishnu Sharmaa, INN/Chennai, @infodeaofficial
Air Force station at Tambaram in Chennai was the centre of attraction on April 3, when proud air warriors displayed their skills. They had all the reason to be proud for that was the moment they were joining the Indian Air Force only to commence a glorious service to this nation. 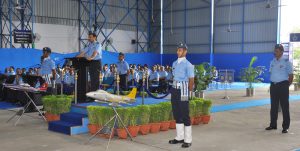 While 1012 air warriors were commissioned into Air Force, their parade left an indelible impact on Air Commodore M S Awana, Air Officer Commanding, Air Force station,  Tambaram. He was reviewing the parade of air warriors.
The Air Officer Commanding was received by Group Captain S Adhikary, Commanding Officer, Mechanical Training Institute and Group Captain CA Somiah, Commanding Officer, Workshop Training Institute.
These air warriors were inducted after undergoing a  rigorous and intensive training at the two premier institutes of the base, namely, Mechanical Training Institute (MTI) and Workshop Training Institute (WTI). Apart from this, seven defence personnel from armed forces of friendly foreign countries also completed the training successfully. The function was followed by presentation of awards and trophies to the meritorious trainees. 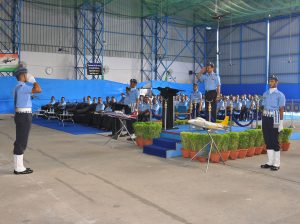 The passing out trainees were administered oath on that occasion. Addressing the newly inducted Air Warriors, M S Awana complimented them on their immaculate turn-out. He further added that the air warriors must strive for professional excellence.
He also brought out that, with the induction of the state-of-the-art aircraft, equipment and weapon systems, the Indian Air Force is witnessing major changes in operational philosophy. Indian Air Force today is on the path of transforming itself into a strategic force of immense calibre.
He urged the Air Warriors to make sustained efforts towards continuous enhancement of their technical knowledge and skills by keeping themselves abreast with the latest changes.
He also advised the trainees to maintain exemplary conduct at all times, in keeping with the ethos and customs of this great service. The ‘Best All-Rounder Trophy’ was awarded to LAC Joga Ram, Weapon Fitter of MTI and LAC Harish Sharma, ESSA of WTI.
Share