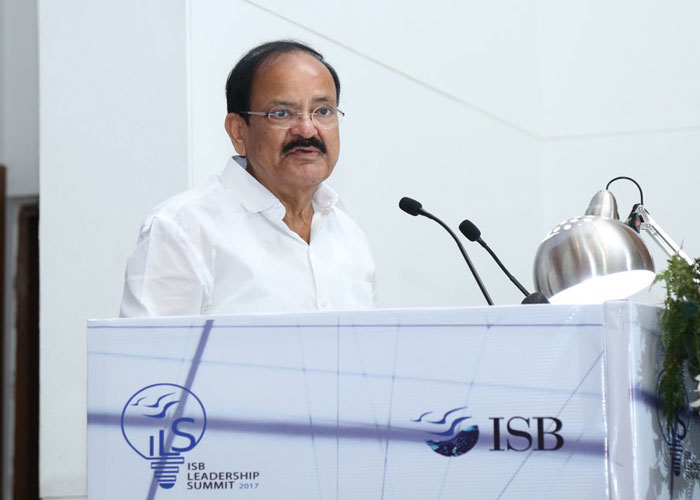 The Vice President of India, M. Venkaiah Naidu said that aspiring business leaders should build a culture of inclusiveness and shape their actions to have a positive impact in the lives of those who need support. He was addressing the gathering after inaugurating the 15th edition of ISB Leadership
Summit 2017 at the Mohali campus of the Indian School of Business on the theme “Transforming Tomorrow: The Future Unraveled”, in Mohali, Punjab today. The Vice President said that an area of concern has been the growing inequalities and exclusion of certain sections of the population. He
stressed on the need to be attentive to these trends to build a culture of inclusiveness. He advised the ISB students that the antyodaya approach advocated by Gandhiji, Dr. Ambedkar and Deen Dayal Upadhyayaji should serve as our guiding principle. The urged students to listen to diverse voices, especially those which are feeble and almost inaudible now.

The Vice President called for a collective resolve to root out corruption and undesirable elements like communalism, casteism, fundamentalism, criminalization of politics, gender discrimination and atrocities on women and weaker sections. He said that its high time to mitigate the devastating
impact of terrorism and launch a coordinated strategy to root it out. The Vice President also pointed that there was a general recognition, echoed in the assessment of the World Bank in 2017, that India is the fastest growing economy in the world, and said that it was time to capitalize on the
demographic dividend by enthusing, equipping and empowering youth who constitute 65 per cent of country’s population.

The Vice President said that while the country could be legitimately proud of what was accomplished so far, the India of tomorrow will have to be a country which would translate the dreams of our freedom fighters into tangible reality. He said that the future India should be which transforms the
quality of life of the citizens, internalize and live the values of democracy and inclusion as a way of life. The vice president further said that India should be a place which places ‘people’, especially those who are the poorest of the poor at the centre of the development process, encourages each
Indian to realize her or his own potential, women get equal opportunities along with men, innovation should be fostered in all spheres and its infinite diversity and rich cultural heritage should be celebrated. He added that that individually and collective efforts were imperative to build future
India.