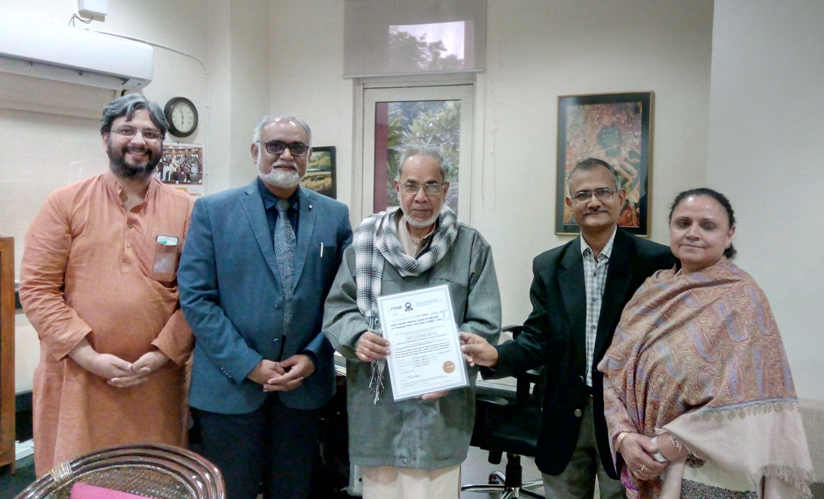 The National Cultural Audio-visual Archives (NCAA) project of the Ministry of Culture, Government of India, implemented by Indira Gandhi National Centre for the Arts (IGNCA) has been certified as the world’s first Trusted Digital Repository as per ISO 16363:2012 standard, granted by Primary Trustworthy Digital Repository Authorisation Body Ltd. (PTAB), United Kingdom. Leveraging this historic achievement, the plan for the next phase is to integrate about three lakh hours of audiovisuals materials, a corpus estimated based on a scoping survey conducted in 25 cities across the country, on this platform over the next five years.
The primary objective of the NCAA is to identify and preserve the cultural heritage of India available in audiovisual form through a process of digitization and making it accessible to the people. By the time March 2018 gets completed, a corpus of 30,000 hours of unpublished, non-commercial audio & video recordings will be made online at http://ncaa.gov.in/repository/, out of which approximately 15,000 hours are already hosted online along with contextual metadata, representing the cultural diversity of India in the broadest sense.

Over 23,000 hours of unpublished audiovisual recordings have already been digitized. NCAA pilot digital repository was developed in collaboration with the Centre of Excellence for Digital Preservation by C-DAC, Pune. NCAA digital repository is established with and powered by DIGITĀLAYA which is developed by C-DAC Pune in compliance with Open Archival Information System (OAIS).
At present, NCAA has a total of 21 Partnering Institutions from across the country, covering 11 governmental and 10 non-governmental cultural organisations. The digitization and metadata standards followed by the Project are in parity with international standards within the overall framework of the OAIS model.

The digitization standards are in concordance with those prescribed by the International Association of Sound & Audiovisual Archives (IASA) and the metadata schema is extended Dublin Core, followed by galleries, libraries, archives and museums worldwide Indira Gandhi National Centre for the Arts has been set up by the Government of India, as a premier research institute dedicated to holistic understanding and expression of Indian arts in their inter and multi-disciplinary nature.
One of the principal aims of the centre is to serve as a major national resource centre for the arts. The IGNCA has been designated by the Government of India as the nodal agency for a data bank on art, humanities and cultural heritage.

The Centre has also been identified by the UNESCO as nodal agency for the development of regional databases for the South and South-east Asian countries on art, cultural heritage and life-styles through the application of state-of- the-art technologies for standardization, exchange and dissemination of data.
The Digital India initiative of the Hon’ble Prime Minister Shri Narendra Modi, launched on 1 July 2015, aimed at connecting rural India with high-speed internet networks and improving digital literacy, will boost the accessibility of the NCAA up to the remotest corner of the country.