Celebrating the genius of cinema at Starmark Bookstore 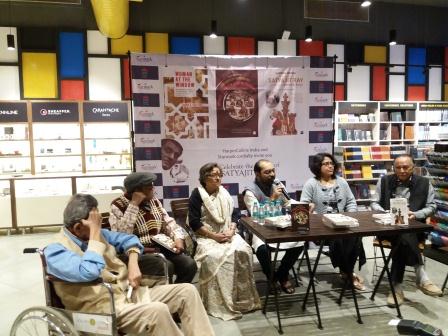 Satyajit Ray is considered as one of the greatest filmmakers of 20th Century and he holds a special place in everyone’s heart. So, it was not surprising that Starmark, one of the largest bookstore chains in Kolkata, along with HarperCollins India held an event honouring the eminent film-maker by launching three books, Shoma Chatterji’s ‘Women at the Window’ – The Material Universe of Rabindranath Tagore, Through the Eyes of Satyajit Ray, Devapriya Sanyal’s ‘Through the Eyes of a Cinematographer’- A biography of Soumendu Roy, and Suresh Jindal’s ‘My Adventures with Satyajit Ray’- The Making of Shatranj ke Khilari.

The book launch was followed by a panel discussion where filmmaker Sandip Ray participated as a chief guest and singer and music composer, Anindya Chatterjee was the curator. Other than the authors, cinematographer Soumendu Roy and photographer Nemai Ghosh also participated in the panel discussion and shared their experiences with Satyajit Ray.

Sandip Ray shared memories about his father especially his unique way of script reading, he said, “He read Hirak Rajar Deshe in the same sing-song manner how it was portrayed in the film. Most of the actors used to feel if they listen to him carefully during the script reading session, it will be easier for them to understand the characters.”

He added, “He wanted his actors to understand the script rather than mugging it because he always made last minute changes to the script. That’s why there were many actors who used to come early to the set asking for the latest script to practice.”

Sharing memories of how his father used to write scripts, Sandip said, “He was very thorough with his research work especially while working on the scripts of Charulata and Shatranj ke Khilari.”

Speaking about her book ‘Women at the Window’, author and journalist Shoma Chatterji said, “My book is not just about the portrayal of a woman at the window and only Charulata, it is about the materialistic universe of a film. It talks about various films of Satyajit Ray and how he focused a lot on establishing a character in his films.”

Author Devapriya Sanyal shared her journey while writing a book on one of India’s finest cameraman, Soumendu Roy.