ON THE OTHER SIDE OF VIRTUAL ATTACHMENTS: ILL EFFECTS OF SOCIAL MEDIA 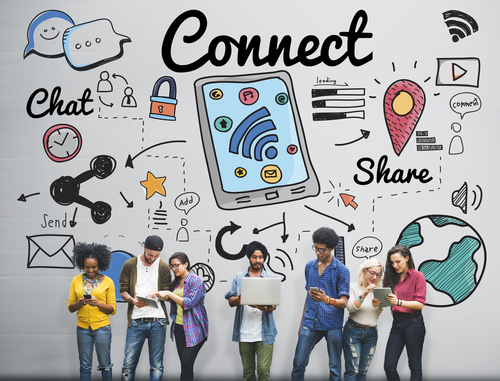 In a world where everyone wants to feel important, social media has become pervasive due to its very nature of engagement; the flux of responses in the virtual world effortlessly aligns with the users need for validation and approval.

With the advent of ‘infinite scroll’ in the year 2006, the affinity people felt towards Instagram and Facebook has amplified to an extent that the endless swipe invented by Mozilla and Jawbone employee Aza Ruskin has taken the controls of our lives. We have become so heavily reliant on social media that it has deteriorated our cerebral performances and will continue to do so if our indifference persists. In this article we will dive into the indelible mark that social media is leaving on our lives, thus, making us slaves to the reign of social media.

In a world where everyone wants to feel important, social media has become pervasive due to its very nature of engagement; the flux of responses in the virtual world effortlessly aligns with the users need for validation and approval.

The Dopamine that is released as a result of all the euphoria and exciting uncertainty devours the relationships, swallows time, money, peacefulness, you name it. Being unfriended on a social network is identifies as a potential cause of trauma among youngsters.

Suicide rates in the past few years have seen an upsurge, notably, the cause is based in the pace of gratification that social media made us habituated to at the expense of our patience, the mass turning to drugs has completely lost the understanding of love, job fulfillment and career satisfaction in regard to the time and amount of patience these sensitive areas of life naturally requires.

On the psychological front, massive consumption of information has given birth to a generation devoid of instincts, common sense and the abilities to differentiate between a truth and a lie. We are sold on lame puns and memes directly grappling with reputations of individuals which sadly is not a bother to us.

Ironically, users who boast of individuality on these platforms are conforming to the same stereotypical standards; the incessant urge to belong ignites their need to fit in the virtual society and the stylization and normalization of serious disorders like anxiety and depression sidelines the ones who really need help.

Other mind-boggling effects of social media that are hampering the orderliness and contentedness of children are- increase in kids dropping out of school, prolonged leave of absence due to depression and forced introversion, lately, they have been very selective in where to invest their time and outdoor activities felt a little out of touch with the ‘young scene’.

It may appear to be an easy way out but the prices to be paid are as high as an irreparable damage to the intuitive, imaginative and emotional capabilities of the users. It is for us to ponder upon the ways to reverse this damage, we must acknowledge the terrifying dependence on the social media and then an active rather than a passive role must be taken to prevent the ruination of our brains and consequently, young lives.

Career as a Fashion Designer

Mental illness should not be kept behind the doors anymore.