The red carpet: The celebrity influence on fashion

Celebrities influence fashion by wearing whatever is in style at the time but they also create trends for themselves. Some celebrities are known to have better knowledge with fashion than other celebrities; we look to them as fashion icons.

They are numerous ways celebrities can influence fashion. Celebrities set the rule on how to dress to a certain event or how you should dress at a certain age.

A lot of times celebrities will promote certain fashion trends. People dress a certain way because their favorite celebrity that stalks on social media is wearing the same thing.

However, not all celebrity clothing comes with a contract sewn in. A lot is based on “understanding” between brands and stars or their styles. Especially in India, where the red carpet scene has erupted over the past decade or so.

Now organizers set aside time for a photoshoot. There is also special red carpet coverage for social media and TV, sponsored by brands.

Good visibility brings in good money. The red carpet is one of the ways casual fashion observers and obsessive become familiar with a designer. Stylist Rishi Raj says people shop for a celebrity by quoting an event where he/she has made an appearance. 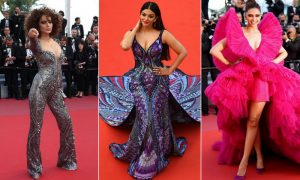 Designer Varun Bahl says, “A celebrity wearing a designer reinstate trends, styles, and glamour in the mind of the customer. This results in a percentage spike in the sales of that garment.” He recalls how a Bollywood actor wore a sari from his collection, ”and we immediately received orders via Instagram”.

A Bollywood imprint gives the most visibility to a designer, hence red carpet sighting feature high on the latter’s lists. But unlike the “pay for play” contracts in the west, personal bonds are at work in India.

Tarang Arora, CEO, Amrapali Jewels, explains the mechanism: a stylist usually gets in touch with a brand, follows it up with a visit to the showroom, and picks up four-five options.

Then the stylist and the celebrity decide on what to wear .sometimes celebrities directly contact brand owners or designers.