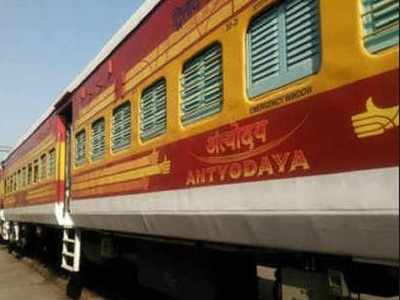 It isn’t easy for the residents of this city like M Ramkumar who often travel to Thirunelveli. The route is very busy, moreover frequent travelers like him make their journey decisions in the last moment.

But now people like him have a train where they can come to the station and buy a ticket and then board the train to commence their journey, thanks to Southern Railway.

The Antyodaya train between Tambaram – Thirunelveli was flagged off by Union Minister of State for Railways Rajen Gohain at Tambaram on 8 June.

The antyodaya coaches have better passenger comfort. The seats and luggage rack are cushioned. Where an unreserved train normally is not known to have a vestibule, this antyodaya has one to help passengers move from one compartment to the other in case of crowd. The flooring in the washroom and at the doorways have anti-skid facility.

The coaches have signages in braille, ten bays with two mobile charging points in each one. Coaches also have bio-toilets, fire extinguishers and purified water dispensers.

Coimbatore – Bengaluru
The other happy news is that UDAY ( Utkrisht Double-Decker Air-conditioned Yatri) Express, the new double decker train between Coimbatore and Bengaluru was also flagged off this month.

According to sources, the Union Minister of State for Railways Rajen Gohain flagged off the first train on 8 June at 10am in Coimbatore. UDAY Express is a fully air-conditioned double-decker chair car train.

Conceptualised keeping in mind the needs and comforts of business travellers, the UDAY Express train has been made by revamping existing double-decker coaches.

The special attractions in this train are said to be automatic food vending machine. WiFi-based infotainment system, GPS-based passenger information system and diffused LED lighting are some of the features that passengers are likely to welcome.

UDAY Express train have eight double-decker coaches and two power cars. Three coaches out of these have been modified to make way for a mini-dining area-cum pantry which will have the automatic food vending machine and powder-coated seats/stools with snack tables for passengers’ convenience. While the five coaches without the dining area can seat 120 passengers, the other three can seat up to 104 passengers.

According to sources, Train No 22666 Coimbatore-Bengaluru UDAY Express will depart from Coimbatore at 5:40am every morning (except Monday) and reach Bengaluru at 12:40pm, taking seven hours for the journey.