Their service is of great importance during lunch-time

Akansha Anand, INN/Gwalior, @Infodeaofficial
Who can forget the Dabbawalas? After the popular business establishments and the film empire (Bollywood), they are the ones who would come into our minds once we hear the name of Mumbai.
Should they stop working even for a day, more than three-fourth of the popular city’s workforce will have their lunch during while on work. But the fascinating point is that these people who deliver lunchboxes in Mumbai to working people are never said to have gone on work stopping except one day in the 128 year history.
In 2011, dabbawalas went on to stop work for attending rally in Azad Maidan to support Anna Hazare. That is not all New York Times is said to have reported in 2007 that the 125 year old dabbawala industry continues to grow at a rate of 5 to 10 percent a year. 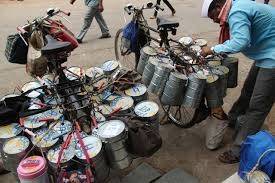 Everyday, about 200,000 lunch boxes are moved by about 4,500 to 5,000 dabbawalas. There are many finer points to it and Infodea went ahead to know about them. Around 128 years ago this tiffin concept become a huge success as known as Dabbas where dabbas means homemade lunch boxes delivered to office workers who can’t go home for their mid day meal.
In 1893, a idea pooped in the mind of 30 year old man Mahadev Havaji Bachche. He started this initiative in Dharamshala, Himachal Pradesh. He was a farmer by profession. He moved to Mumbai to settle down and started a small-time business known as dabbawalas a chain of food delivery.
The delivery system uses dabbawalas – the people who deliver the dabba which means “one who carries a box” to the customers. They‘re identified by their white kurta uniforms, traditional Gandhi Cap and will often ride bicycles.
Every day in India about 200,000 dabbas are moved by a 5000 dabbawalas feeding thousand of people daily. Dabbawalas collect the tiffins from the people who made from around 10am (often by Indian wife or mother) where dabbas are taken on crates via bicycles through busy roads to reach the nearest train station.
They labelled using a system of symbols and colors denoting from where the tiffin picked up, which station it will sent to and the final address of the customer, all hand painted.
The tiffin then travel on city’s train network where at other end local station dabbawala pick them up for the last stage journey and deliver dabbas to the customer before lunch time, which is never late. As well as being delivered, the dabbas are also returned too.
Mumbai in spite of being – the country’s financial and commercial capital, the city of dreams, being home to around 20 million people, with world’s most expensive home and with fast food chains. Nothing can replace delights of a home cooked meal especially when it is delivered to you.