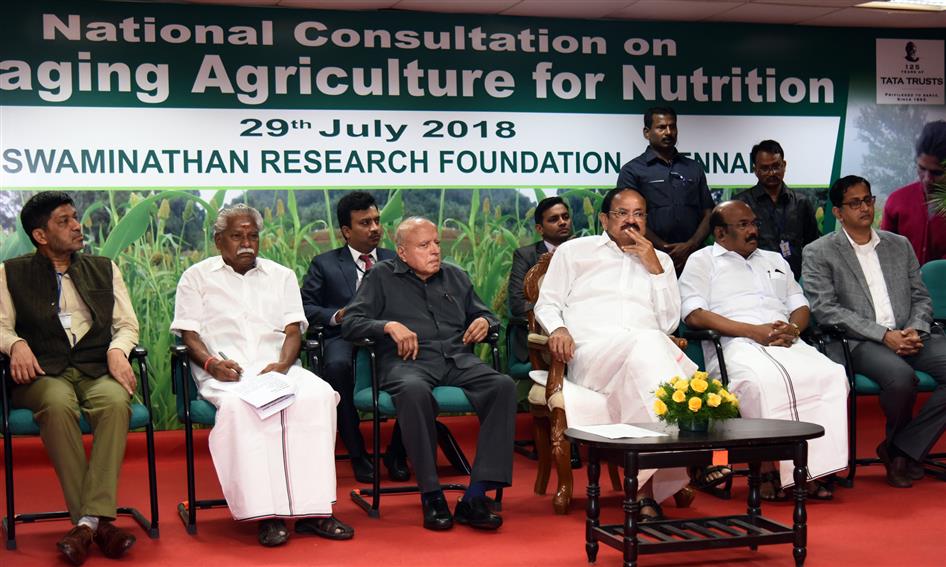 By- SVS, INN/Chennai, @svs037
It is time that we diversify our food production by moving away from mono cropping of major cereals to a system that integrates a variety of food items including small millets, pulses, fruits and vegetables, said Vice President of India M Venkaiah Naidu while speaking at the inauguration of national consultation on leveraging agriculture for nutrition at M S Swaminathan Research Foundation (MSSRF) here today.
We need to cultivate more food that is rich in nutrition, he reminded saying that pulses cultivation will not only help in improving nutrient rich food production but also in restoring nutrient value to the soil.
Stressing on in house cultivation of food he said we need to create food security that is more based on home grown food rather than importing food items. On the economic side, it will reduce our import burden as nearly six million tonnes of pulses are being imported.
Millets like jowar, bajra, ragi and little millets like kutki, kodo, sawa kangni and cheena are known to be nutrient-rich. Since cultivation of millets require less water efforts must be on to promote their cultivation as part of crop rotation.
Vice President of India reminded that apart from encouraging nutritionally-rich crops, there is a need to create a market for such items. Promoting or supplying them through Public Distribution System (PDS) can be a good option.
Tamil Nadu Minister for Agriculture and Animal Husbandry R Doraikkannu said about 28.8 lakh metric tonnes of pulses were cultivated in Tamil Nadu before 2017-18. Currently the pulses cultivation witnessed an increase of about 1.15 lakh metric tons, area of cultivation of pulses also increased about 1.9 lakh hectares of land. An amount of Rs 4.5 crores was sanctioned for enhancing pulses cultivation, he said.
An amount of Rs 5.77 crores has been sanctioned under National Food Security Scheme to increase millet cultivation in the State, said Minister Doraikkannu. Founder chairman of MSSRF M S Swaminathan also spoke. MSSRF executive director V Selvam welcomed the gathering. MSSRF (food security) director R Rukmani proposed vote of thanks.