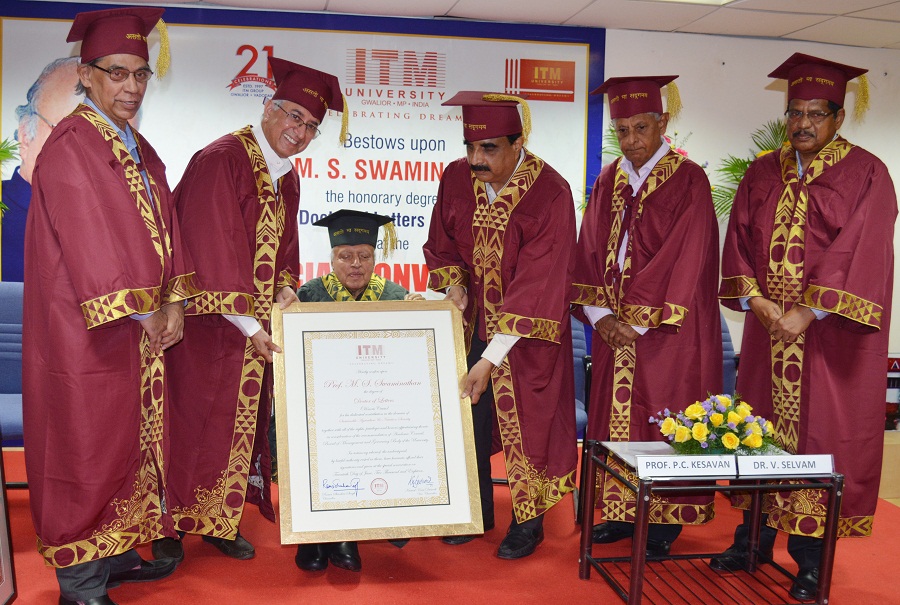 Dr Kamal Kant Dwivedi, Vice Chancellor of ITM University, Gwalior presented the degree to Prof Swaminathan. Dr Dwivedi quoted a Sanskrit saying that translated to: there is no greater service than selfless sacrifice which makes other happy. This was an apt description of Prof Swaminathan’s life and work, he said.

In his acceptance speech, Prof Swaminathan thanked the University for the honour bestowed on him and the Foundation. “Sustainable Development Goal 2 (Zero Hunger) can only be achieved through sustainable agriculture”, Prof Swaminathan said, expressing happiness that ITM University produced 1,000 agricultural degree holders. He said it was important that the core of learning include the dimensions of social, gender equality, economics and ethics. 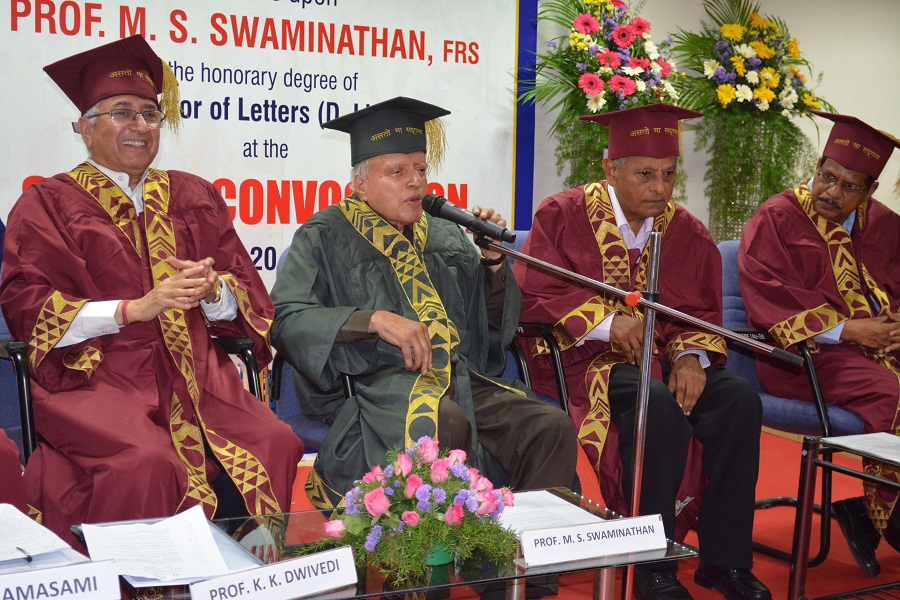 Stressing on the ethical aspect, especially with regard to patenting new discoveries, he urged institutions to be put in place to maintain equity. Exemplifying Swiss Government’s purchase of the patent for the Golden Rice variety which made it available to all developing nations free of cost or at nominal charge, Prof Swaminathan stressed to emulate the model.

“Biodiversity conservation is a key step in sustainable agriculture”, he said and gave the example of how the germplasms of thousands of varieties of rice available now can be attributed to the work of farmers, who originally discovered it. “The first rice cultivators were women,” Professor Swaminathan said, noting that there was a portrait of a woman in a temple at Along in Arunachal Pradesh, whom the local people consider to be the one who introduced rice into cultivation.

Dr T Ramasami, former Secretary, Department of Science and Technology, while congratulating Prof Swaminathan, called for re-defining agricultural research highlighting the current disconnect between reality, research and development. He spoke about the need to develop people-centric science, i.e. science that adds value to people’s lives and how the basis of all of Prof Swaminathan’s work has been centered to this philosophy.