They did dye for Guinness

Premises of EVP Film City boomeranged with the thunderous applause of the crowd. They were there to show in their cheer and stand in support of their near and dear ones who were in the main arena there to take part in the attempt to create Guinness record.

As the entire nation came forward to celebrate Independence Day, more than 1006 people took part in an effort to find a place in Guinness Book of Records by applying VIP Natural Hair Colour Shampoo in the stipulated time of 15 minutes.
BuyHappy Marketing LLP, a research, development, and marketing company focused on delivering consumer products was behind the whole effort. 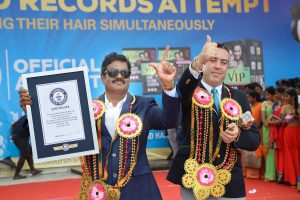 It was making an attempt to create a world record by bringing the largest gathering that was applying hair-dye shampoo in a given time frame. R Kay, Founder, and MD, BuyHappy Marketing LLP encouraged the participants to wet their hands with water and then go ahead with applying the hair-dye with wet hands, participants began their effort.

A good deal of entertaining dance and musical performances kept the spirits of the participants high. They stood determined even as the sun was showering heat with intensity. Even as the participants began their attempt Bollywood veteran icon Karishma Kapoor gave her word of encouragement. The effort ended with participants washing their hair after a duration of 15 minutes.

Being a part of this effort will bring you name and fame, said R. Kay. As it is bound to create history. When you go home say it with pride that you have were a part of the effort that will stand forever in history. 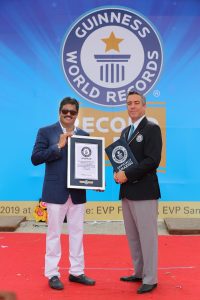 They worked hard for three months towards making this event possible, he said. Karishma Kapoor said the event coincided with two special occasions. While one was Independence Day the other was Rakshabandhan, she was happy to be here at such a momentous occasion. Determination showed by participants in the attempt to create a world record is impressive, she said.

Excitement reached great heights as R. Kay said on the occasion that they will soon be coming with a product for snoring called ‘VIP Snore Care Oil,’  this can control snoring and improve sleep quality.

Speaking more about his product VIP Natural Hair Colour Shampoo he said it contains shampoo, hair color, and conditioner. The product can be used without gloves, can be applied in chest, beard, and mustache also. Jack Brockbank was the adjudicator for the event on behalf of Guinness World Records. Consul General of Myanmar in Chennai Professor Ranganathan J was among others present.