A Review to Lipstick Under My Burkha

Lipstick under my Burkha was released four years ago and was overlapping and revolving around the dis humanities faced by women in our society.

Movie stares four women who were all facing a different issue related to their independence in their lives and the way those women resolved their issues is showcased in this movie of Alankrita Srivastava which was produced by Prakash Jha.

It is basically an Indian Hindi-language comedy and drama movie starring ladies like Ratna Pathak as Rosy, Konkana Sen as Shireen Aslam, Plabita Borthakur as Rehana Abidi and Aahana Kumra as Leela in lead roles.

All these four ladies we’re in search of women fantasies and their freedom and were living a secret different life. Though, they faced mountain-like obstacles in their way but succeeded to clear them all with their courage.

Usha is living in a small colony in Bhopal and has got a novel named Lipstick dreams which are based on women’s fantasies revolving around the life of Rosy.

Usha is a 55 years old widow who is famous as ‘Buaji’ in the colony and seeks to return to her days of youth and enjoy all the freedom.

She was secretly living her fantasies with one of the swimming trainers named Jaspal and have virtual sex with him. She is portraying the character of Rosie of Novel Lipstick’s dreams.

In the neighborhood of Usha, there lives a young girl Rehana Abidi, who is a fresher in college and seeks to live a modern life of jeans and top girl but is forced by the family to wear Burkha.

Crossing the boundaries made by her family she secretly steals cloth and dresses her up in jeans and tops, who loves Miley Cyrus.

Leela is a young beautician in the neighborhood of Usha and Rehana who owns her own parlor and seeks to spend her whole life with his secret lover Arshad who runs a small photo studio shop. 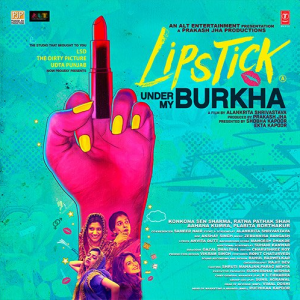 She constantly visits the wedding planners to offer them her Make-up services and Arshad’s photography services, to make money, and travel the whole world with Arshad.

Shire en is one of their neighbors who is a mother of three boys and works as a door to door call girl. She is obsessed with her husband who considers her only a thing to fulfill his sexual needs and dominates her.

Her husband, Rahim is sexually dominating and refuses to use contraceptives even after his wife is prescribed by the doctor to not take any contraceptive pills and not go for abortions which she used to avoid frequent pregnancies.

The movie has very nicely compiled the lives of four ladies and showed the side of a woman who seeks to live her life with her choice.