Love does not happen because of someone’s caste, religion, and gender. It doesn’t happen to see someone’s status, either you’re rich or poor. There’s no wrong and right in Love. One is here along with the other that’s all it matters. It is an unconditional thing, ‘it is a tremendous feeling.’ It is a vibe. It is a pure thought of the divine. It is a belief that always comes with the comfort of serenity & respect, which everyone wants to ‘SHAZAM’ them in their lives. It is a fountain that builds the connection between the two, unlike souls. And this is what we refer to as ‘SOULMATES.’ 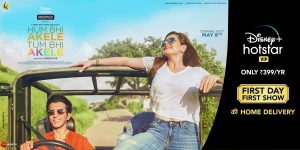 Hum Bhi Akele, Tum Bhi Akele starring Zareen Khan and Anshuman Jha is the last year’s feature film of Disney+ Hotstar. The movie is based on the LGBTQ community and their exploration to find ‘Love.’ The story started with the two runways. The bride to be Mansi [Zareen] who’s, from Merrut, and the groom to be Veer [ Anshuman ] who’s, from Punjab left their homes for being united with their loved ones. Mansi is a lesbian though Veer is gay. They both have reached out to Delhi to meet their loved ones. Mansi is looking forward to her girlfriend Nikki, where she found Nikki is in McLeod Ganj. However, Veer wants to meet his boyfriend, Akshay Mittal [Gurfateh Pirzada]. Akshay is married and having obstacles to battle about his external affair with Veer and unhappily married life. Akshay assures Veer that he’ll figure out our relationship issue at the LGBTQ party till then stay. At the party, unlike collision, happened between Mansi and Veer. This encounter chance led them into stranger friends with almost the same problems.

Veer’s emotions completely shattered into misery to be handled because of the breakdown of his heart by Akshay, who can’t accept him publically because of the fear of Society. Mansi offered him to come along with her at McLeod Ganj to meet Nikki.

From here, their series of audacious takeovers has started. Mansi is a ‘bindaas’ woman who loves every little thing in life. On the flip side, Veer is an innocent and generous person. If Mansi is the messy head, then Veer is the one who takes care of the mess. This journey break ushers them to explore deep affection, to discern the heartful connection between them.

As they arrived at McLeod Ganj, Nikki refuses to accept her relationship with her because of the fear of the parents and society tantrums.

The two, unlike souls, decided to settle together as in ‘soulmates’ where they will share the half-love but a complete connection of belief and serenity. But this cute & unique love story also have their diastole and systole, twists & turns. Even though after staying months as a couple. Mansi still misses Nikki. She realizes that there’s something incomplete. She misses the other half. Although, Veer already started feeling the connection with her. He accepted her in all ways along with them but never want to lose his partner too. He couldn’t figure out the fear of insecurity and did something which might be substituting his whole life. He had an accident where he’s gone into the comma, which shudderingly Mansi from within.

Harish Vyas [Director] made the movie with conceptual thought. He maintained the distance between the hypothesis and ingenuity. But, it looks like he failed to delineate the realistic notion. The storyline of the feature film wants to show the kind of battles that people used to fight who comes under the LGBTQIA community. The screenplay of the film is moderate. The narration part could’ve been better. In the climax part, it remains unsorted, which should’ve been figuring out. Though it is one of the main reasons, it seems unrealistic. Zareen Khan tried to mold into Mansi’s character. It seems she did sincerely, but it won’t look too engaging with this challenging role. Ayushman seems natural and promising in his character, but unnecessary editing has shaped his part into the dull shade too. The chemistry between this fresh new pair is notably compelling. Apart from the unwanted sorted twists turns the story into dullish. “Bulla Ki Jaana” also finds a peak throughout the film, with the tone and texture of the song changing with the condition.