Nithya Menon on making her web debut with Breathe into the Shadows:” it was too meaty, a role too pass up”

Last year, Nithiya Menon acted in Bollywood film Mission Mangal, adding Hindi to the long list of languages she has now done films in. The actor – who has appeared in Tamil, Telugu, Malayalam and Kannada movies – has added another first to her list, making her web series about with Amazon prime video’s Breathe: Into the shadows.

Starring opposite Abhishek Bachchan, who is also part of a web show for the first time, Menon plays a mother whose six-year-old child gets kidnapped in the crime thriller.

The critically acclaimed star is known for her unconventional roles – she played a physically challenged woman in Myna, a Kannada film that won her a Filmfare for Best Actress, and she was part of the lead pair of OK, Mani Ratnam’s 2015 Tamil hit, along with Dulquer Salaman.

As she waits for the lockdown to end and things to go back to normal, Menon speaks to Vogue about playing a complex character, her love for languages, and her plans to become a full-fledged musician. 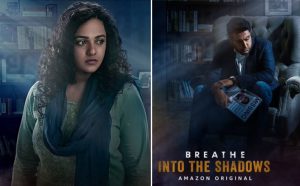 It was not different at all. I think there is a lot of intrigue and mystery behind web series. But it doesn’t feel different from a film shoot. Content-wise, yes there is definitely expansion and diversification.

Absolutely, I would not have done it if I was just a bystander. I have been offered a lot more on OTT platforms- some of them are very successful shows. But it has been important to me that my character is not somebody who is just a buffer.

It is important that the script offers something for the performer in me. That’s why when I heard this script, I thought that it is really unique and not something that comes by every day. It was no brainer, and too meaty a role to pass up.

The lockdown has pushed all the plans ahead. I have two Telugu films and two Tamil films, one of them with Dhanush. I’m also doing a web series in Telugu for Amazon Prime video and of course, the next season of Breathe.