Actor from Bareilly ki Barfi and Shaadi Mein Zaroor Aana has now been selected for the remake of recent Telugu investigative thriller HIT, as declared.

Director of HIT which stands for Homicide Intervention Team, Sailesh Kolanu will now be releasing this movie in the Hindi language and Rajkumar Rao will be working as the main cast actor in this movie. HIT is the story of a cop who is in search of a woman. 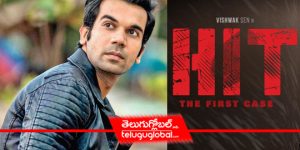 Casting Rajkumar Rao got his film Sailesh said “The first case of HIT tells the story of a police officer who is constantly fighting a battle with his past and his present. So it’s a troubled character. I wanted to cast someone who can bring that darkness to the role and still make the audience root for him with a mature performance”.