De De Pyaar De is a 2019 Indian Hindi language film written by Luv Ranjan who is famous for the most entertaining movies written by him.  Movie casts Ajay Devgan, Tabu, and Rakul Preet Singh in lead roles as Ashish, Manju, and Aisha respectively.

Ashish has left her ex-wife and two kids and has settled abroad where he met Aisha.

Hit film is guaranteed with a screen sharing of actors like Ajay Devgan and Tabu, but when this match is garnished with a fresh actor like Rakul Preet, the film ensures to have a big profit and superhit views.

A Marriage knot in our country is tied on two important basis age differences with the bride and groom and second, they should not have any relations before marriage.

If someone breaks any rule from these that person is a burden on society and is not eligible to stand in public. This poor mentality is not restricted to the middle-class families but in each and every family of India.

Ashish is a Financer by profession and loves to invest in companies to play in profits and loss and lives abroad there he met Aisha, a girl with a modern mentality who is an engineer by profession, but works in a bar part-time to keep her fresh and have fun.

Aisha believes yo live life with full fun and live her life with her aspects and don’t give a fuck to what society thinks about her.

Ashish and Aisha are hell different from each other, as Ashish is a 50-year-old rich man and Aisha is a 26-year-old girl who manages to fulfill her life needs. Leaving all differences apart they decide to live their life together.

Manju, ex-wife of Ashish here brings a twist in the movie who is a perfect housewife and has managed her life with her kids. Apart from a responsible woman, she is also a woman with an amazing sense of humor. 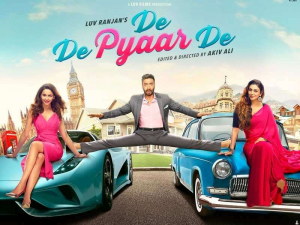 Ashish and Aisha went to Ashish’s home to introduce his family to Aisha, but when he reached he found that the marriage celebration of Ashish’s daughter was going on there, and due to uncertain circumstances he had to play Manju’s brother in front of his daughter’s in-laws.

The movie brings up all prospects, like romance, comedy, and seriousness.

The movie also discusses the society who considers divorce an offense, and treats a divorcee apart from society, he/she is considered as a cruel human of society who couldn’t make it to his/her marriage.

The movie is overall a powerpack of entertainment, romance, comedy, emotions, sacrifices, education and much more than this.

The best thing is many real-life issues like divorce and age margins are mentioned in the movie and are discussed.

This movie is absolutely not a family movie. Because the motive of the picture and family do not match at all.